“Symphony No. 1 «Capax Dei» for Choir and Orchestra turned our to be my first opus” – says Sławomir Kupczak, teacher and composer – “it contains everything I wanted it to have, both from an aesthetic and technical standpoint – and it recapitulates the years I spent searching.”

Words like these are worth a second glance, especially when they’re spoken by an artist who rather shies away from writing solemn passions, cantatas and other rather pompous forms. “Symphony” contains developed versions of ideas he explored in his previous pieces, including Rukola, which was commissioned by the New Music Orchestra from Katowice and De Profundis for vocal harmonies, which, from a formal standpoint, explored and expanded previously developed heterophonic techniques.

Paweł Szymański defined heterophony as a polyphonic texture characterised by “the frequent appearance of the octave in places where counterpoint polyphony considers them an exception.” But we don’t have to delve in detailed explanations, you just have to listen to the Symphony to notice how individual instruments, while playing independently, diverge and create increasingly dense, overbearing sounds. “Musicians improvise only with timing: they can lengthen or shorten something, decide where something ends. This freedom unlocks a certain type of expression deep inside them.” – adds the composer.

The name of the symphony itself – Capax Dei – “open to God”, leads us into areas that we, as Kupczak’s audience, are rather unaccustomed to (well, maybe the aforementioned De Profundis being the exception here). It starts with an explosion of a violent cacophony of sounds, which the composer calls “the screaming”; then we move on to “the doubts”: the instruments create a space for the choir which starts to chant the words of Psalm 130. Kupczak calls the last part of the piece “limbo, or a kind of ellipsis”, as the sounds of the instruments quickly die down to make place for the coming silence – which nearly never comes, as it’s broken by the audience’s thunderous applause.

The Biblical inspirations of the piece invite a closer look. The aforementioned Psalm elaborates on the communication between the Chosen People and God, which, by the way, isn’t all that easy. “Out of the depths have I cried unto thee, O Lord / Lord, hear my voice: / let thine ears be attentive / to the voice of my supplications.” The choir chants in Latin, rendering the whole thing basically incomprehensible to the average listener without a university degree in the classics, which in turn makes it all the more tragic – the supplications won’t even be heard by the mortals. The only thing that can be fully understood is the music, even if some fragments of the Psalm are oft repeated, almost imploringly.

A sense of humour was never something special among composers – Haydn often placed little jokes in his symphonies, Wagner filled his operas with coarse gags, and baroque suites were teeming with joy and overt eroticism. Schoenberg and his twelve-tone technique broke something and the light-heartedness disappeared from classical composition, as if held back by the horrible experiences of wartime. It was Pierre Schaeffer’s concrete music that reinvigorated the field. His Symphonie pour un homme seul brought corporeality back to music. That new vigour was later reinforced by the pranks of John Cage and the avant-gardes raised in the spirit of the Fluxus movement with their return to Dadaist nonsense. With each passing decade the situation continues to improve, and the Freudian death drive seems to have evaporated from concert halls. 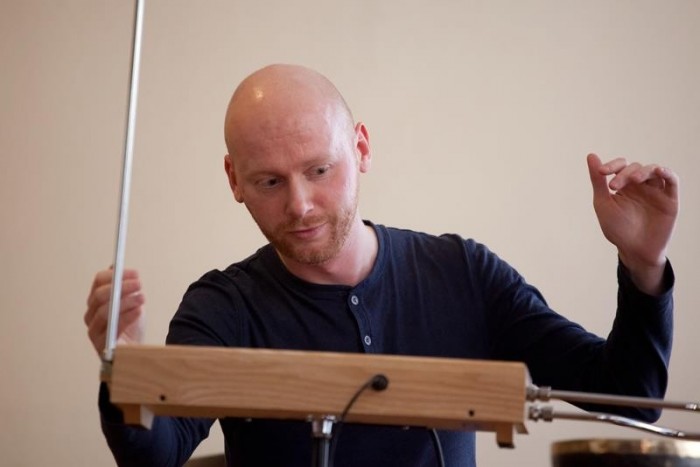 “My audience isn’t always aware that I don’t treat all the musical gestures I write down in my scores seriously” – says the composer about the risks of using humour – “and I don’t always give the listener a chance to uncover the provocation.” A shining of such a provocation would be Figment for orchestra – its world premiere took place at the 14th concert of the Generations cycle at the Concert Studio of the Polish Radio. “Part of the audience realised what’s going on and they were smiling after the show. The rest treated the entire performance seriously and there were lots of piercing stares (laughs).” And treating this particular piece seriously is quite a challenge – the opening has more solemn pompousness than some battle scenes in famous Polish feature films. Kupczak claims that “you have to learn to read music, just as you have to learn to read books. I’m not going to take full responsibility for the listener,” which in turn begs the question: who can really hear the music they’re listening to and if how should we behave when the joke wasn’t to our liking – so that we’re not accused of not having wits enough to grasp the convention.

When it comes to Kupczak’s works, understanding the convention is paramount. And it’s not only recognition that counts, we need to accept it, too. “Critics often wrote that my compositions were banal, naive and simple. And I still like to use elements that are spurned by the majority of the so-called ambitious composers.” The inability to perform a detached assessment and exorbitant expectations in a person that decides to listen to Kupczak’s Dossier A.Z. for three saxophones and orchestra might kill any pleasure that someone could have derived from this composition, which, by the way, deserves lots of praise for the way it plays with genres and conventions. Kupczak introduces us to the meanders of counterpoint and rhythm play in a very interesting, delicate way, using jazzy motifs. “What would happen if Gershwin were alive today? Dossier A.Z. would happen (laughs).”

Electronic music is a natural environment for Sławomir Kupczak – he was active in the Wrocław Computer Studio, made up the Phonos ek Mechanes trio with Cezary Duchnowski and Paweł Hendrich, and in his recent compositions Kupczak uses the Theremin and synthesisers.

Kupczak’s Novella is a 47-minute story about... That’s the thing, what is it about? The composer won’t reveal that to us, content with only hinting that Novella is a summary of the sounds he remembers from childhood, but later adding that “the composition (...) has to be a vector for content, it has to make reality more defined.” A typical concrete music laboratory – rustles, knocks, computer sound effects, uneven breathing and out-of-context abstract sounds. All of these mixed with hundred of electronic and alternative music genres, from noise and drum & bass to slow post-rock howling. Making reality more defined? We need to pick a different way than the one Krupczak’s on, we need to create reality for ourselves because our cognitive abilities are insufficient to recreate it.

Even if we’re unable to recognise the history contained in a composition, we hear that its author put it in there. It’s the other way around with Upominek (A Gift), a composition for computer that premiered at the Laboratory of Musical Thought Festival in Jelenia Góra. In this piece, different field recordings – broken glass, a jackhammer, dull rapping on sheet metal and other “sounds of the city” – slowly morph into club music – from heavy techno and its more delicate dub variations to wicked dance rhythms that sound like some French chanson played on a harpsichord. Towards the end the music loses melody and becomes increasingly loud and dense – finally, the composer leaves us with a heavily modified sound of broken glass.

Sławomir Koliber (Hummingbird) Kupczak – that’s his handle at soundcloud.com. One of his recent compositions for orchestra, performed at last year’s Musica Polonica Nova Festival, has a similar title – it’s called Hummingbirds. Its structure is similar to the structure of Symphony No. 1 – the latter had “the screaming”, “the doubts” and “limbo” – creating a sort of theological or philosophical treatise. In Hummingbirds, the composer brings us closer to nature, and the feeling is reinforced by the pliability and suggestiveness of the music itself. The initial ruckus of the composition is replaced by a more orderly set of sounds which, in turn, later leads us into a calm and quiet state. The dynamic of the composition is very similar to Francisco Lopez’s La Selva, which contains field recordings from a remote research station in the Costa Rican rainforest. “When I compose, I’m very aware that the listener might not be able to decipher all that.”

Quotes from an interview conducted by Ewa Szczecińska and Jan Topolski, published in the 19th issue of the German-language edition of “Glissando”.

‘The Naturalists’ is no outdoor concert. The idea is simple – singing romantic songs about nature while trekking through a picturesque forest