The very fact that Deutsche Grammophon has released an album of music by Grażyna Bacewicz is newsworthy in itself. The man behind this, of course, is Krystian Zimerman, who has been recording for DG since his victory at the 9th Chopin Piano Competition in 1975. The Polish pianist is said to have been thinking about publishing both piano quintets since 2002. He has finally succeeded, and the recording features Polish instrumentalists: Kaja Danczowska and Agata Szymczewska on violin, Ryszard Groblewski on viola, and Rafał Kwiatkowski on cello. The project started with a short tour of Poland in February 2009 (concerts in Łódź, Warsaw, Poznań, Kraków, and Katowice), and culminated in a recording session at the Music Academy in Katowice. 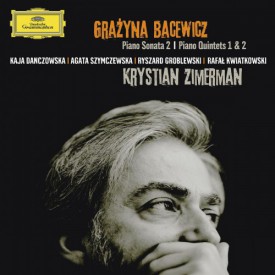 G.Bacewicz Sonata No.2 for Piano,
Piano Quintets No. 1 and 2.
Krystian Zimerman, Kaja Danczowska,
Agata Szymczewska, Ryszard Groblewski,
Rafał Kwiatkowski, 1 CD,
Deutsche Grammophon 2011.The music of Grażyna Bacewicz was a topic of discussion at the time, as 2009 marked both the anniversary of the composer’s birth (February 5, 1909) and death (January 17, 1969). The media then fell silent on the subject. But thanks to the work of Krystian Zimerman (as well as Łukasz Borowicz and Joanna Kurkowicz along with the Polish Radio Orchestra this silence has been broken for good.

This music leaves you wanting more. Take the Piano Quintet No. 1 (1952). After the beautifully lyrical, airy “Moderato molto espressivo” comes the fierce “Allegro”, in which each instrument seems to play solo, although it’s the piano that plays “lead violin”. “Presto” is a series of laconic dialogs, set to the rhythm of the oberek (the composer’s favorite dance), making you want to dance. The third part, “Grave”, takes us into a world we sometimes dream of; we don’t know if it’s heaven or paradise. The finale (“Con passione”) straddles peace and madness.

Only the artists — especially Krystian Zimerman — know how a quintet of soloists can manage to sound like a single, phenomenal body.

Piano Quintet No. 2 (1965), while featuring a classic structure (“Moderato – Allegro” / “Larghetto” / “Allegro giocoso”), comes from a period when Bacewicz was interested in the avant-garde. It features short motifs, harmonic clashes, sonoristic effects, and polyphony mixed with individual thoughts. All of this is performed with perfection, tensely (the finale of first part), and lyrically but without tears (the middle “Larghetto”).

Sonata No.2 for Piano is a central part of this album. Bacewicz herself gave the first performance of the piece in 1952. Andrzej Jasiński soon made it a part of his own repertuar, inspiring his student, Zimerman, to do the same in 2009.

Zimerman plays with virtuosity (as heard in the opening “Maestoso – Agitator” and the middle fragment of the first part of the series), tenderness (in the middle of “Largo”, suspended between whirling chords and longing figurations), majesty (a pianist knows when the music is about the power of dense notes and when it is about narrative clashes and culminating points), pulsation (the finale, “Toccata. Vivo”, is once again based on the rhythm of the oberek). His performance is simply masterful and congenial.

“There’s a lot going on in my music. It’s at once fierce and lyrical,” Grażyna Bacewicz once said. I hope that a lot goes on with her music as well — both fiercely and lyrically.