What’s the difference between “critical history” and “political history”? Devoted to Polish documentary films from 1989–2009, this collection of essays, edited by Agnieszka Wiśniewska, is the sequel to a similar volume on Polish feature films of the same period, published last year. While the Political Critique (Krytyka Polityczna) publishing house hasn’t opted for a uniform cover design, the rest remains exactly the same: the tone, perspective, language, structure, and the editor (sans Piotr Marecki). The only significant (?) change is in the title: “critical history” has been replaced with “political history”. Why? 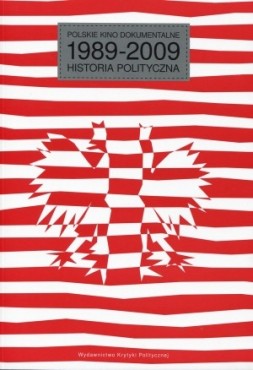 Polish Documentary Film 1989-2009:
Political History, ed. Agnieszka Wiśniewska,
Political Critique publishing house, Warsaw,
176 pages, in Polish bookstores from April 2011 The change is essentially as coquettish as it is superficial. “Critical” and “political” are simply two catch-phrases that ring the loudest in the world of (the aptly named) Political Critique. Over the course of the last few years, a handful of authors associated with PC, many of whom are personal acquaintances of mine, have performed the admirable task of building from the ground up (and partially transplanting) a solid critical vocabulary with which they describe not just social facts, but the manifestations of artistic activity (although I doubt they’ll appreciate this differentiation). For several years now, Political Critique has been putting out books that apply a selection of sanctioned philosophical discourses (Žižek, Agamben, etc.) to art criticism. What more, the vocabulary developed in these titles has seeped into the everyday language of artistic criticism, including my own field, film criticism. It is becoming increasingly common to find essays that use the word “political” as a positively-charged term, while “critical potential” is regarded as the Holy Grail of all art.

Some appreciate it, some don’t. While I might not be ecstatic about it, I don’t want to parrot that oft-repeated grievance of Polish artistic circles, one that boils down to virulent accusations of “overinterpretation”. The period after the foundation of the Restart group (of which I am a skeptical member, a fact that I’m not about to deny) was marked by populist cheering whenever a filmmaker berated the pen-pushers, smart-asses, and weaklings spouting wisdom about cinema on Facebook instead of getting out there and waging war with the real world like actual men. Political Critique and their debate on film unwittingly revealed just how much anti-intellectualism still exists among the Polish artistic elite; I’m not about to wield their arguments.

2.
That being said, we may go on to a discussion of my own objections about the book. First of all, the whole thing is put together in a rather shoddy manner and artificially inflated to its 177 pages with ubiquitous boxed text and quotes, the purpose of which is to create a dialectical tension with the content of each chapter. There’s nothing wrong with hypertext, but this is just laziness: these quotes should be digested and cited within the articles themselves, not scattered about as if to say patronisingly (and implicitly): “look at this nonsense” or “that’s another way of putting it”.

Secondly, the essays are so inconsistent in length and incomparable in scope that the book seems more like a rough draft (the articles by Tomasz Piątek and Maciej Nowak read like op-ed pieces off of the PC website, and their inclusion in any sort of “history” is a misunderstanding).

Thirdly, and most importantly, there’s nothing about cinema in this book. The movies selected for analysis (including Hear My Cry by Maciej Drygas, Ewa Borzęcka’s Arizona, The Parade by Andrzej Fidyk, and I Bore Such A Beautiful Son by Marcin Koszałka) might as well not exist at all. Halfway through the book, I felt as if I was reading a collection of mock-reviews, so uninterested are the authors in the form of film, in that which actually appears on-screen. In the introduction, the editors state: “Not only do we use ‘aesthetic’ categories, but also — and perhaps most importantly — political categories” (p. 5). How meaningful: aesthetics deserves quotation marks, but politics doesn’t! (In most of the essays, “communism” is written in quotation marks, as if to suggest that “real” communism differs from what we experienced prior to 1989; capitalism, not have been granted its own quotations, is given short shrift).

RESTART group calls itself a think tank of Polish cinema, with its change as the group’s main objective. It was created 31 July, 2010 at Era New Horizons Festival. The team consists of film critics, scientists, philosophers, writers, editors, curators born between 70. and 80.

Most of the essays (with the exception of the articles by Agnieszka Wiśniewska, Kazimiera Szczuka, and Magdalena Błędowska) commit the sin of almost completely omitting the formal issues in film. Readers will not learn what the analysed films look like, what the editing is like, and how they use sound and imagery to describe (or construct) some observed truth (or falsehood). The authors avoid entering into a dialog with the films; it seems as if they don’t even want to watch them. They’re merely interested in the presence or lack of “critical potential” (of course!), and lambaste any film that has no revolutionary ambitions (in his essay on A Bar at the Victoria Station, Jarosław Pietrzak writes not as a critic but as a know-it-all, and goes on to deride the director for “resorting to a discussion of ‘human nature’” [p. 108]).

3.
Ignoring form results in radicalised content. Artur Żmijewski compares Catholic Poland to communist North Korea, based on the observation that neither country has a truly neutral public sphere, and that Christian symbols serve to obscure the role of the Church in the AIDS epidemic. I see no difference between Żmijewski and his image of the rosary as a noose around the necks of AIDS victims, and the radical pro-lifers who shout slogans about the “holocaust of the unborn”. Neither side is particularly interested in the complicated human experience of ideology and liberty, instead searching for truth in specious syllogisms.

If Żmijewski reads a bit like Terlikowski (Polish journalist, philosopher and writer known from a right-wing Fronda.pl – ed.) à rebours, it is largely because they share a lack of self-irony, a fault present throughout the book (if not in PC in general). Żmijewski starts with a confessional (self-critical?) tone, disavowing the beliefs he held fifteen years ago: “My view of film at the time was naïve; I saw it as a form of entertainment, not as an ideological spectacle or a machine through which the status quo was created and maintained” (p. 9). But how can the reader trust an author who now sees nothing but that machine in cinema, and for whom its only hope for redemption lies in a narrow pigeonhole labeled “subversiveness”? His piece is evidence of a lack of intellectual curiosity or desire to challenge one’s own beliefs. “The portrait of the Supreme Leader is an ideological statement on par with the image of the Virgin Mary on a lapel pin or a cross necklace,” I read on page 9, and I don’t know what to make of these words, which demonstrate a moral colour-blindness driven beyond the limits of any reasonable debate. If someone claims, as Żmijewski implicitly does, that a Catholic convent and a totalitarian prison are one and the same, then the discussion is over, as we have left the realm of reason and are merely shuffling the cards of an intellectual game of solitaire that bears no reference to any real experience.

Much of the writing in this book strikes me as precisely that: a game of solitaire that borders on solipsism. The deck is surprisingly thin, as demonstrated by the footnotes, according to which the theoretical horizon applicable to Polish documentary films stretches from Žižek to Badiou to a handful of articles in the press.

The deficiencies of this book are best visible in the piece by Jakub Majmurek, which is very well-written and at once fundamentally flawed. In writing about Hear My Cry, Maciej Drygas’s documentary about the 1968 self-immolation of Ryszard Siwiec, Majmurek on the one hand points out that no government official from the period in question is given a chance to speak, but, on the other, the author holds the greatest gag in his own hand: he deprives Siwiec himself of his voice. He does not quote a single word of the manifesto Siwiec recorded a few days prior to his self-immolation, a declaration presented in the film. Instead, the author chooses to arbitrarily jam Siwiec’s gesture into the ontology of the “gesture”, juxtaposing it with Guy Debord’s “spectacle”.

The eponymous cry of Siwiec makes no appearance in the piece. No wonder. As far as I recall, the statement includes words such as “freedom” and “mother, the most beautiful of all words”. It’s simply to close to neoliberalism, patriarchy, family, and all the other bogey-men of Political Critique’s Halloween arsenal. Siwiec must be silenced (i.e., an important part of the film must be ignored), and Drygas must be reproached for his insufficient “critical potential”, while ignoring the ingenious use of music composed by Paweł Szymański and the two-minute, non-narrative prolog, and erroneously describing a formal technique used in the end, involving the enlargement of different areas of the same shot. (On page 27, Majmurek describes it as a series of separate shots depicting a flaming figure “flashing in the corner of the screen”. The shot essentially remains unchanged — it is simply shown in several different ways.) This is a typical Political Critique-style gambit: extensive omissions with regards to the form, radical selectivity in terms of perspective, and finally, a verdict: the filmmaker is unworthy of Debord.

4.
The examples are endless. All of them boil down to the question of whether it is possible to practice a form of “political criticism” that is neither doctrinal nor — in its worst and most persuasive forms — dogmatic. In the final scene of Kieślowski’s Camera Buff, Filip Mosz decides against shooting a film about irregularities at the local brickyard, realising how the film could affect the everyday lives of many people. He turns the camera on himself and starts to talk about the birth of his daughter. Just think of all the “critical potential” that just flew out the window!

I dream of a kind of criticism that is open to gestures such as Mosz’s; a criticism that is not permanently married to politics, but just sleeps with it from time to time in order to conceive ideas worth reading. A kind of criticism that can encompass Mosz’s gesture as well as that of Agnieszka in Man of Marble (1976), who shakes her fist at the entrance to the Polish Television building. Filip makes a hasty sign of the cross in front of the very same building. Both of them are dear to me, just as dear as Political Critique — a cousin with whom I love to argue. But I do miss other voices; I miss — to use the vocabulary of PC — the possibility of another possibility in Polish film criticism.

Has been sent and received. ‘Beats of Freedom’ is a documentary in which music serves as a means of creating memory about one of the most fascinating fragments of our history