Gaba Kulka, singer and songwriter. Gaba Kulka is a pop star. And she’s not ashamed to say it. But she defies the bounds of pop stardom, dipping into the most disparate musical genres and blending them together. Her music is a little bit rock-and-roll, a little bit folk and quite a lot of cabaret. Among her major influences she lists Alice Cooper, Megadeth, Halford, Iron Maiden, Kate Bush, Tori Amos, Joni Mitchell, Suzanne Vega, Björk, Peter Gabriel and PJ Harvey. She jumps from the alternative to the mainstream with a flick of the wrist and a twist of a note. She takes an adventurous approach to making music, journeying through many different styles and sounds to create a whole new genre. 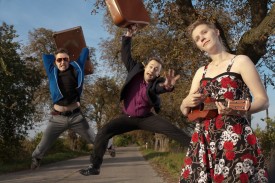 Gaba Kulka exploded on the scene with her second album, 2009’s Hat Rabbit and won a Fryderyk Award in the Vocalist of the Year Category from the Polish Phonographic Academy. Since then, she’s continued to make intriguing music that tests the limits of popular music, blending old and new, high culture and low culture. Always leveled with a dose of control. She is a pop artist, but her independent approach to the genre has afforded her the tag of “progressive pop”. She plays the piano and composes her own music, presenting a musical imagination that is rare among Poland’s youngest generation of performers. She is an ambitious artist, but she refuses to put on airs. She genuinely appears to be having fun on stage, with frivolous costumes and hairstyles adding to the “musical theatre” feel of her performance style. She’s not afraid to do covers – but her interpretation always takes an entirely fresh approach to even the most familiar compositions – from Serge Gainsbourg to Madonna.

In this section we introduce Polish artists, places, and new phenomena. We always ask the person or the place’s representative the following question: WHY ARE YOU HERE? How they answer it is completely up to them. Time for Gaba Kulka.

Her collaborations with other artists have broadened her horizons even further, bringing life to the Kucz/Kulka project and her latest endeavour with Bartosz Weber from Mitch & Mitch and Piotr Zabrodzki (known for her piano work on Młynarski Plays Młynarski) and the great Macio Moretti.

This summer, Gaba Kulka is scheduled to perform at the Heineken Open’er and Jarocin festivals in July and the OFF Festival in August. She’s also performing with a solo concert at The University Of Oslo, Campus Blindern on June 18. 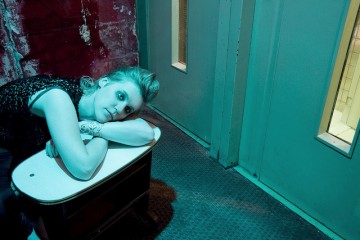 “I played violin in grade-school, then came the whole guitar infatuation, learning Alice Cooper and Brian May songs etc. But the first song I actually wrote myself was in fact done with the help of the piano, and I remember being totally chuffed that I (apparently) single-handedly spawned a new creation that could stand for itself, had its beginning, middle, end, had its inner logic. It seemed almost supernatural to me then, in a gleeful, childish way. A rabbit out of a hat. It was called ‘Brother Wizard’ and I’d like to think it stood the test of time considerably well. I was hooked from then on. There’s nothing compared to the feeling when a song starts to take shape.”

“I’ve always been excited by the meshing of artists who are completely different and making them go together. But Iron Maiden isn’t just my thing superficially. In my music, there is a lot of metal melodrama. Iron Maiden isn’t my guilty pleasure – I find snobbery in that expression, because it’s either a pleasure or it isn’t a pleasure. This is definitely a pleasure of mine. And Bruce Dickinson is definitely an important person for me when it comes to vocals. His influence on my vocals is almost as great as that of Kate Bush.”

“A bunch of people say I sing jazz. This is a big misunderstanding. I don’t want to reject it because jazz is a beautiful thing, but I sing pop, these are pop songs.”

“The majority of my music’s traveling to people’s homes is, so far, via internet, and I receive a heart-warmingly positive feedback from a lot of online acquaintances and friends. And then there’s a fierce little army here in Warsaw and Poland. Not large in numbers but the energy… man!”

WHY ARE YOU HERE?
I don't often ask myself why I do what I do. It feels so very natural, perhaps simply writing and singing songs comes out better than anything else I've done thus far. It's the only place where the everyday crush and unceasing demand for judgement disappears - a story told through song can breathe on its own. At least for a moment. 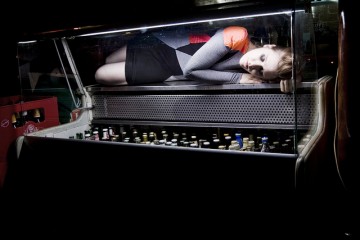