Marcin Koszałka (born in 1970) – director, screenwriter and cinematographer. His extremely controversial debut in 1999 instantly brought him to the forefront of young Polish filmmaking. In spite of heavy-handed blows from both critics and colleagues – Koszałka continues to make painfully sincere pictures. 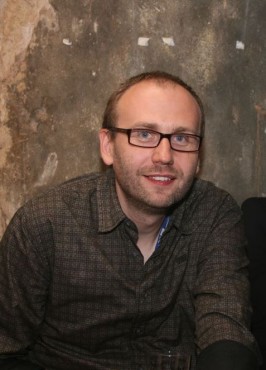 Marcin Koszałka at 50. Kraków Film Festival
photo Tomasz KorczyńskiHis mother called him a moron, a half-wit, an idiot, a jerk, a waste, an untalented, good-for-nothing slacker – as documented in Such a Nice Son I Gave Birth To, his first film. Widespread recognition and festival awards following its premiere secured him a warm welcome to the cinema scene - albeit the darker, more dysfunctional world of Magdalena Piekorz’s Pręgi (2004) and Borys Lankosz’s Rewers (2009). His camera work on these two films brought on even more awards for a cinematic style that marries the technique of the old Polish Film School and an uncompromising realism, with a touch of film noir. Refusing to rest on his feature-film laurels he returned to writing, directing and filming documentaries. Today, as production wraps on his latest job as cinematographer in Jacek Bromski’s criminal thriller Uwikłanie (Entanglement), Koszałka’s Declaration of Immortality (2010) continues to make the rounds on the international festival circuit – most recently winning mention at the Tampere festival in Finland and a Silver Hugo for Best Documentary at America’s Hugo Television Awards earlier this year.

WHO'S WHO AND WHY?

In this section we introduce Polish artists, places, and new phenomena. We always ask the person or the place’s representative the following question: WHY ARE YOU HERE? How they answer it is completely up to them. Time for Marcin Koszałka

Koszałka’s films have one thing in common – death. His terrific fear of death drives him to use film as an uncompromising tool to understand death, to come to terms with mortality, to mitigate this fear – and in the process, perhaps, understand life and its injustices. His pursuit of an answer to the inevitably rhetorical question of existence brings him to the dark corners of his parents’ shabby living room, the gaunt sterility of a hospice, finally to the morgue itself, the crematorium and, most recently, to the Tatra mountains, where he follows “Crazy” Piotr Korczak, a master mountain climber nearing the end of his career.

His protagonists are people seeking to cheat death, denying the inevitable onset of illness, aging and death. But what makes this chase all the more disturbing is that many of these people are close friends and relatives of the director. Koszałka sacrifices his privacy and theirs to create incredibly intimate portraits of dysfunction, exhibitionism, manipulation and sabotage. It may be awkward, ugly, even cruel, but Koszalka’s films are irrevocably tinged with a heavy dose of truth – albeit an uncomfortable, inconvenient truth. The result is a self-incriminating psychoanalysis in which the subject is stripped bare – a technique critics have likened to emotional pornography. Convictions, intentions and ambitions are mocked, set against the undeniable irony that death cannot be escaped, that immortality is impossible. Ultimately, the pain of existence boils down to the knowledge that once one has attained the highest peaks, fulfilled one’s greatest ambitions, there is nowhere else to go but down. Degradation and decline are inevitable, whether one is a successful businesswoman, a champion mountain climber... or an award-winning filmmaker.

QUOTES:
“An artist can’t succumb to critics — otherwise he’d be an artist with no balls.”

“After finishing high school, I had no desire for learning. I kept changing subjects, I was looking for an easier field so I could get my diploma quicker. I wanted – as my mother used to say – to slide my way through. Finally I finished three years of external studies in Sociology. I sat around in cafes, hoping for something to happen, hoping to meet someone and for my life to change.”

“I wanted to be a great climber. I was good enough, but not good enough to make it to the top. And so I couldn’t find my place in life. Fortunately, I found film.”

“My obsession with death is a result of the neurosis I acquired at home, where there were conflicts and a lot of pressure. I don’t have time to treat it because I’m too busy. Besides, I’m afraid that if I was cured of my neurosis, then I wouldn’t have as many ideas. I think film is a better therapy.”

WHY ARE YOU HERE?
Film is a way for me to overcome fear, to learn to one day die with dignity. Not to cry out in panic, not to be afraid.