The picture must be familiar to everyone: it won the title of World Press Photo of the year 2010. It depicts Bibi Aisha, an 18 year old Afghan girl whose nose was cut off by her husband, whom she fled to escape the terror of domestic violence. Found hiding at the home of her parents, she was taken away at the orders of a Taliban commander and her nose and ears were sliced off. According to local custom, a man who has been left by wife is said to have lost his nose, and should seek to avenge the shame by cutting off the nose of his unfaithful spouse. 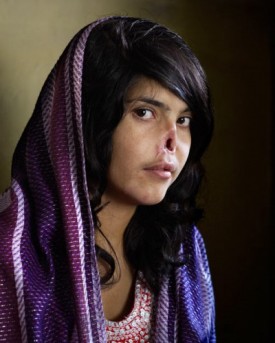 © Jodi Bieber, South Africa, Institute for Artist
Management / Goodman Gallery for Time
magazine / World Press Photo of the Year 2010 The photograph was taken by South African photographer Jodi Bieber of “Time” magazine, which featured the image on the cover of its August 2010 issue. The picture is a studied, posed portrait. The Afghan girl uncovers more than just her beautiful, mutilated face – she unveils her flowing hair. A colourful scarf covers the back of her head, cascading down onto her shoulders. She directs her calm, attentive gaze toward us. The shocking power of the image comes from the clash between her serene beauty and the gaping wound in the middle of her face. The disturbing effect of the picture is softened when we learn that Bibi Aisha has been rescued from Afghanistan and has undergone reconstructive surgery on her nose and ears.

This image of brutally destroyed beauty evokes associations with a photograph that few remember: that of Michelangelo’s “Pieta” in the Vatican, damaged by a disturbed assailant in 1972. Wielding a hammer, the Hungarian-born Australian Laszlo Toth shouted “I am Jesus Christ, risen from the dead!” and attacked the famous statue, unguarded at the time, in St. Peter’s Basilica. He managed to strike the figure of the Virgin Mary fifteen time before he was restrained, removing part of her arm and chipping her eyelid and nose. As he later explained, she was “too beautiful”. The attack was a media sensation. Photographs of the damaged, noseless Madonna were seen around the world. But the young assailant himself was the obvious center of attention. Although there was hardly any doubt from the very start as to his mental condition, his actions incited heated outrage. Not because of the desecration, but because of the damage to Buonarroti’s masterpiece. It was an attack on Art. The sculptor Giacomo Manzu, creator of the ornamentation on the bronze doors of the basilica, demanded that the assailant receive the death penalty. To be fair, the students of one Swiss art academy insisted that Toth be given the highest distinction at the Venice Biennale. “No more masterpieces!” was the slogan. The anarchic spirit of 1968 had not yet completely dissipated. Toth was not tried in a criminal court, but was instead placed in a psychiatric hospital. He was released two years later, and deported to Australia as a potential threat. He has not been heard from since. 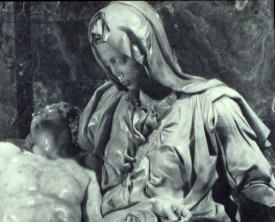 The religious outrage expressed in the world media following the attack on the Vatican “Pieta” focused primarily on the man who chipped the nose of the masterpiece. The assailant was clearly disturbed, yet the investigation was conducted with the utmost care: why was he in Rome, where did he live, where did he have his coffee, where did he go for wine, what did he read (the Bible), what was his occupation (dishwasher at a bar), etc. Manzu’s demands for the death penalty remained unheeded, but Laszlo Toth was effectively removed from society. What do we know about the perpetrator behind the mutilation of beautiful Aisha? Has he been punished for his actions? Condemned for them? Shunned? Or will he go unpunished, in keeping with his own sense of male honour? After all, he’s only guilty of maiming his own wife, not a masterpiece.