A friend and I recently examined our consciences and we came to the conclusion that it was boredom that ultimately drove us out of the church. Today, of course, we can provide rational explanations for why we kicked Catholicism to the curb and became atheists, but before reason could take over, it was my body that reacted, opening my jaws wide during liturgy. We both grew up in religious families — what more, ones in which going to mass had been a form of resistance against the communist system. When martial law was proclaimed, the heads of my parish decided that children’s mass would take place on Sunday at 10:00 am, at the exact time when the popular kids show Teleranek aired on regime-controlled television. The decision was thus part of a greater battle over the minds and souls of the country’s youth, a battle into which I too was enlisted. I dragged my feet cheerlessly to the House of the Lord, though where I really wanted to be was at home, watching the next episode of “The Adventures of Cywil the Dog” or whatever it was they were playing on Teleranek that Sunday morning.

Because for me going to mass was like watching the same taped episode of a TV show over and over again. “Kneel! Stand!”, always at the same time, mechanically recited responses and prayers, and an apathetic priest muttering something under his breath during the sermon. I never listened to the sermons anyway, preferring instead to immerse myself in my thoughts; I would usually analyze the previous day’s hit list on Radio Three. When I finally became brave enough to rebel, I simply started skipping Sunday mass. I would stroll around the nearby cemetery during liturgy. The dead were much less boring than church.

Boredom weakens the body. It puts it into a state of apathy and torpor. You remain motionless or pace back and forth aimlessly (like characters in Antonioni’s terribly boring films). But boredom can also spark resistance, rebellion, and crime. I’m reminded of the opening scene in Bonnie and Clyde. An impatient Faye Dunaway, bored and restless in her family home, spies Warren Beatty out of her bedroom window, and the two set off on a journey to the other side.

Boredom reduces us to simple elements, to biological substances. But boredom isn’t synonymous with bliss: on the contrary, it evokes anxiety, discomfort, and helplessness, and lowers the temperature of everything. Boredom thus requires some kind of impulse, an antidote of some kind, to achieve a breakthrough. Boredom led me out of the church pews, but only because I finally reacted to it (Was it thanks to books? Talks with friends? Subversive films? I don’t know; there were many impulses). I could just as easily have stayed in those church pews and gone on being bored to this day, just out of habit. But while boredom can be a liberating factor, there’s no way to free oneself of boredom.

Boredom is like an insult. Telling someone that they’re boring is worse than telling them they have bad breath. We place the blame for our own boredom on the shoulders of others: “I caught this virus from you!” It’s worse than an unpleasant odor, which can easily be dealt with, after all. Boredom is an embarrassing illness. Ever since I was a kid I’ve been told that “intelligent people are never bored.” They can always find something to occupy themselves with: reading books, cooking, or hobbies. But all this does is treat the symptoms of boredom. You could do a thousand things at once and still be bored. Boredom permeates the very foundation of our existence. 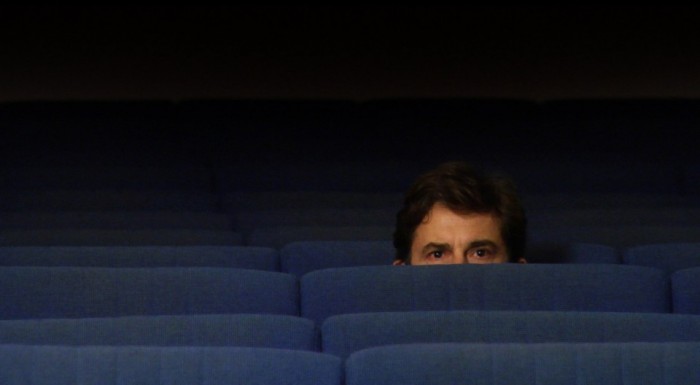 Nanni Moretti in „To Each His Own Cinema”

Back when I was so terribly bored in church, which drove me to a crisis of identity, I rarely ever went to the movies. Our family wasn’t in the habit of regularly watching films on the silver screen, and the cinemas themselves were images of misery and despair (they had nothing on the invariably majestic churches; the one in which I suffered, brutally torn away from my Sunday morning cartoons, was under constant construction and resembled a missile launcher). But with time, the cinema became my anti-church. I was always bored in church, but never at the movies. Even if I didn’t understand the film too well, I put a lot of intellectual effort into seeing it, and thus kept my body from growing weak. The boredom that drove me out of the church pews also led me into the movie theater seats. “I did it all out of boredom, Your Honor.”

And so it lasted for a long time. I could be bored with books, I could be bored with people, I could even be bored with my own life, but I was never bored with films. Well, almost never. Just a few years ago, I would never have walked out of even the trashiest movie, or not finished a film on TV or DVD. Then again, critics rarely admit to being bored with a film, because that would be so “unprofessional” and would draw accusations that they “hadn’t understood” the film and that they weren’t attentive and concentrated enough. The confession “I found it boring” is like Pontius Pilate washing his hands — to continue the religious narrative — and saying “I will have nothing do to with this anymore, do with it what you will.” Boredom is also sometimes used as a final argument with which to belittle a film (“Don’t see it, you’ll be bored to death!”). But that’s actually a very imprecise argument. What some may consider deadly boredom will strike others as enlighteningly boring or even a fascinating experience. Examples include the multi-hour long plays directed by Krystian Lupa or films by Béla Tarr which put us into a state of such extreme boredom that it becomes, to some, a trance, enlightenment, catatonia, or whatever else.

Such experiments are nothing out of the ordinary in cinema and theater. Our everyday boredom is plain and average. As I said, I managed to avoid that boredom. Even when the cinema became my career, it still retained an element of celebration that competed with church and state celebrations. Until I talked to a certain director at a film festival where there were dozens of movies that required viewing. She asked me, “Don’t you find cinema boring? I find it hard to sit through a whole film. It’s as if I’ve seen it all before.” And I must admit that I do find myself experiencing plain boredom, everyday boredom, boring boredom in the movie theater with growing frequency. It’s the same boredom that used to get to me in church. I once again feel that I know the dialog by heart, that I know when the orders “On your knees! On your feet!” will be issued, and I no longer feel like listening to the sermons given by the characters on screen. Sometimes I’ll even walk out of a screening, which leaves me feeling just as guilty as I once felt when I would walk out of church halfway through mass. I feel like I’m committing a sin, but this time it’s a professional one.

Boredom desacralizes. It reveals the void, monotony, and banality behind the surface of the decorations and under the illusion of attraction. But where does this revelation happen? Does it happen in what we’re watching? Or does it happen inside of us? I had no doubt that it was the former when it came to church and holy mass. Years later, I’m afraid it’s the latter when film is concerned. The boredom, ennui, and apathy is within me, in the very foundation of my existence. And that’s the whole problem. “Moi, je m’ennuie. C’est dans ma vie une manie”, as the somewhat forgotten Damia once sang. Interestingly, in French the verb “s’ennuyer” means not just “to be bored,” but also “to miss something or someone.” Because boredom is inextricably linked with hopeless longing for someone or something that would rescue us from our lethargy.

What conclusions can we draw from this? The point is that it’s time for us to rebel (against ourselves) and walk out of the church of cinema. It’s time for us to find a new temple or at least take a walk between the graves of dead artist (who, surprisingly enough, bore me less than living artists). But this is more of a challenge now than it was before. While I had to put my own money in the collection plate, I now get a few pennies here and there for writing about film. In this situation I can only hope that I will follow in the footsteps of another late critic who was said to have had a habit of falling asleep at the beginning of screenings, waking up at the end, and writing reviews and books that continue to be read and quoted by students of film to this day. Boredom, it appears, can be creative.

The series of articles on boredom is published in cooperation with Goethe-Institut goethe.de/polska portal and transmediale – festival for art and digital culture.

‘Boredom is one of many techniques intended to change time, space, reception, quantity.’ A talk on boredom in art and boredom in creation

Despite the enthusiasm of its creators, Aiko, Kenji and Cog get lost in the human world. The AI revolution is still to come

Turowski and Baumgart provoke a reconsideration of actual history precisely by doctoring it. Maybe the term ‘metamodernism’ might apply for this

‘Boredom is one of many techniques intended to change time, space, reception, quantity.’ A talk on boredom in art and boredom in creation