For several years, Katarzyna Kozyra has been working on successive stages of a series titled In Art Dreams Come True, each featuring a new film or performance. The original concept, which evolved in a variety of directions, was to take lessons in disciplines traditionally regarded as feminine from two men: Maestro, an opera voice teacher, and Gloria Viagra, a Berlin drag queen. When the artist began creating her fairy-tale wonderlands, Artur Żmijewski said that “her latest work is increasingly starting to resemble the embodiment of a middle-class concept of art.” Kozyra did not become the new Maria Callas, but failing and stumbling on gallery stages has given new quality to her art, and she herself has added new chapters to the history of gender art. These chapters began to multiply, and before long, audiences began demanding a conclusion to the series. When it seemed that the end was finally in sight, a new one would appear, with an even more elaborate plot. In Summertale, Maestro and Gloria Viagra die at the hands of female dwarfs in a fairytale land devoid of men. When it comes to women taking revenge, I prefer Quentin Tarantino’s Death Proof. Was this the long-awaited Fin?

Casting, which occupies an entire story of the Zachęta, is most likely the artist’s final foray into making dreams come true in art, or at least the end of her attempted career as a more model woman, one that sings like a diva, wears makeup and high heels, and holds flowers just the right way. Most importantly though, Casting marks the beginning of a new project, one that might occupy ― judging by its scale ― a few more years of Kozyra’s time. 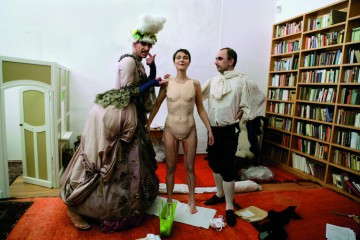 “This is not an exhibition. This is not a retrospective. This marks a new phase in the artists latest project,h explains the curatorfs introduction. The description is a bit over the top. Casting is both an exhibition and a retrospective. Visitors to the Zachęta will see a selection of Kozyra’s pieces, from her days as a student at the studio of Grzegorz Kowalski, till 2010. As one would expect from an artist who uses every penny she earns to fund her next project, Kozyra has used the exhibition to take one step forward and reverse the roles of the artist and viewer by holding a casting for her new film. The title says it all. Kozyra has been working on an autobiographical film since 2009. Judging by the methods used in her previous work, the final cut will be preceded by movie trailers and intermediate stages.

Behind a black curtain

The exhibition has a clear goal. Kozyra is getting ahead of herself. Audiences at the exhibition view her work for a reason. Every viewer is a potential actor in her upcoming film. They prepare for the role by seeing the exhibition. 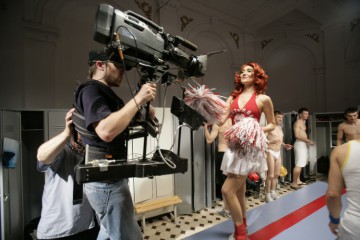 The exhibition itself is rather simple, in a good way. You wouldn’t guess by the large space it occupies, but there’s not too much to see. A single viewing should be enough for most visitors, which isn’t always the case with video artists. Each piece has a separate space and can be taken in without disruption.

The artist’s collected works make quite an impression, even though (or perhaps because) the exhibition doesn’t provide a comprehensive selection. Most of the artworks have become classics, from Kozyra’s graduation piece Animal Pyramid (1993), to Olympia (1996), both Bathhouses (1997, 1999), The Rite of Spring (1999–2002), Punishment and Crime (2002), and finally a few episodes of the series In Art Dreams Come True, screened in the so-called concrete room, which has been re-purposed as a movie theater for the occasion. The only thing beyond that is a black curtain. 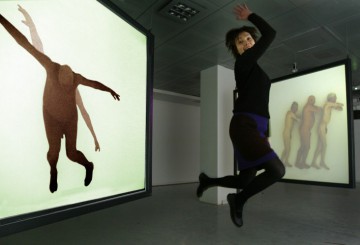 In the setting of The Rite of Spring installation,
from the artist’s private archive

Behind the curtain, a casting is held everyday for the duration of the exhibition. Anyone with the nerve do to so, regardless of sex, age, or experience, may give it a try in front of the camera. Who will get the leading role? The first results of the talent search will soon be revealed at the exhibition.

The charm of the lead role

What characters will be featured in the film? Professor Kowalski? The artist’s current partner, Fabio Cavallucci? Kozyra’s long-time friend, artist Katarzyna Górna? The main role, of course, is the most touchy subject. After years of assuming such characters as opera divas, cheerleaders, Lou Salomé, and ― early in her career ― men (Men’s Bathhouse), the artist once again poses questions about her own self. 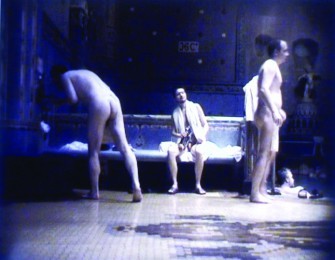 Kozyra’s early work was inextricably linked to her personal experiences. She approached the issue of death with intuition. While working on Animal Pyramid, her graduation piece at the Academy of Fine Arts, Kozyra was suffering from cancer and undergoing chemotherapy. She quite literally experienced a brush with death. At the same time, she claimed to have been “touched by the fact” that she “had to use her sickness as an excuse for Pyramid.” Pyramid is an aesthetic ready-made using stuffed animals and a drastic film documenting the process of killing and stuffing the hide of a horse. In Olympia, Kozyra shows the imperfection of the body ― in contrast to the Manet painting she alludes to ― by serving as her own model in two of the three photographs.

Forced to face a media witch-hunt, Kozyra paid dearly for her first two artistic attempts. The scandal provoked by Pyramid was merely the first in a series of controversies referred to as the “cold war between art and society” ― the artist played a role in the media storm on at least several occasions. Perhaps it was her uncompromising attitude that stoked the flames of the controversy, apparent in her interviews and the film The Scandalous Kasia K. (1999), screened at the Zachęta exhibition in an re-purposed reading room. Kozyra doesn’t mince words, nor does she care much for political correctness. And that’s why we all like her. The artist’s personal notes, which will serve as a basis for the screenplay of her upcoming film and are published in the exhibition catalog, seem to blur her restless nature in an attempt to describe the facts. Let’s hope it comes back in the movie. 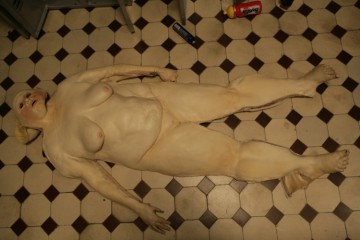 Shooting a feature film about one’s own life sounds like a risky project. Probably even more so than entering a bathhouse full of naked men while wearing a rubber penis. When Kozyra took Men’s Bathhouse to the Venice Biennale in 1999, “Max” magazine had a mass said for the success of the exhibition at the Polish pavilion. It worked that time ― the artist won a distinction. Should the Virgin Mary be asked for intercession once more? It doesn’t seem to be the doing of the gods. Kozyra simply keeps an eye out for the right opportunity. She uses self-depreciation to her own advantage. She has even said the same of her illness in one interview: “I try to consciously take advantage of everything that happens in my life.”

Once again, Kozyra proves that she’s got the power.