In July 2007 Rio de Janeiro’s gigantic statue of Christ the Redeemer was voted one of the seven new wonders of the world. It is an illegal wonder, as the institution responsible for additions to the list of World Heritage sites, UNESCO, rejected the results of the referendum, calling it a private, informal initiative. There was also controversy over the role played by former Brazilian president (and recent visitor to Poland) Lula da Silva in lobbying for the statue. 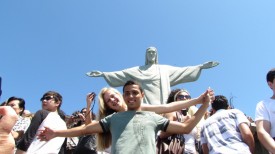 photo: Maria PoprzęckaA struggle of ambitions has been going on over whether the Christ of Świebodzin is taller than his Brazilian counterpart. The Polish statue, even the added height of its golden crown, doesn’t stand a chance: Christ the King stands on a plane, his arms stretched out over the small-town landscape. The Christ of Rio, on the other hand, is perched on a 710 meter granite rock from which he blesses the “Nr. 1 view in the world”: heavenly blue bays and lagoons, famous beaches, and a city nestled among steep, rocky cliffs.

The view has long been considered a local treasure. A railway up to the top of Corcovado was opened as early as 1884, and later became Brazil’s first electrified rail service. The construction of a statue of Cristo Redentor on the peak was first proposed to mark the 100th anniversary of Brazil’s independence. The winning project was submitted by engineer Hector da Silva Costa, while the French sculptor of Polish descent Paul Landowski designed the face and hands (Landowski is better known to Europeans as the author of the slender statue of St. Genevieve gracing the bridge that links the Eastern bank of the Seine to Île Saint-Louis in Paris). The unveiling of the monument in 1931 was an enormous event, also in terms of science and engineering: the lighting was triggered by Nobel Prize-winning physicist Guglielmo Marconi using a radio-control system installed aboard a yacht in Genoa. The statue was given a full cleaning for its fiftieth anniversary, and the ceremonial lighting of the Christ was done by John Paul II. 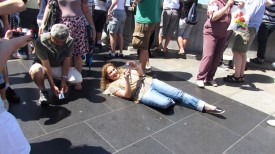 More work was conducted on Christ the Redeemer a few years ago, adapting the structure to the requirements of mass tourism. The viewing deck was enlarged and elevators were installed alongside the railway line, along with escalators and all the tourist amenities: shops, cafés, and restrooms. Christ now receives 300 thousand people every year.

The extravagant, astounding, almost unbearable beauty of the landscape beheld from Corcovado hardly strikes one as melancholy. The atmosphere on the viewing deck could best be compared to a country carnival: the noise of the crowd is deafening. Groups of football fans bellow their terrace chants (we are, after all, in Brazil) and wave their club banners. Everyone takes pictures — pictures of themselves in front of the landscape of course — but that’s not the most prized photo. The holy grail of travel photography on Corcovado is the shot with the tourist standing in front of the statue, arms outstretched, mimicking the Redeemer. It’s not an easy picture to snap, what with the crowd and the close range of the statue. In order to fit the subject and the statue into the frame, photographers must lie down on their backs. But the mood is friendly, and despite the squeeze people gladly give up their spots, stay out of each other’s shots, and pull prostrate photographers onto their feet to quickly make room for others. There’s a lot of joy and shouting. A bar below the foot of the statue serves cheap caipirinhas, the Brazilian national drink, improving the mood on the viewing deck above. 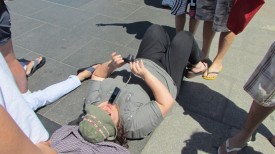 It’s obvious that tourism (a favourite among cultural anthropologists for years) has played an enormous role in the desacralisation of the world. But there’s likely no other holy place on earth where a religious symbol has become as strikingly secular as the Redeemer atop Corcovado. Here the imitation of Christ, professed by Thomas à Kempis in Christianity’s second most famous book by the same title, is reduced to the level of lighthearted pantomime. We imitate Christ by stretching out our arms in a redemptive gesture, smiling at the camera. A offensive act of desecration? No, just a simple observation. Apparently no religious sensibilities are offended by the ritual, seeing as the archbishop of Rio recently consecrated a chapel devoted to the Virgin Mary, tucked into the rear side of the pedestal. It’s even open for weddings.

Standing before the majestic panorama that spreads out beneath the Redeemer, it is hard to accept the teaching of Thomas à Kempis: “Strive to withdraw your heart from the love of visible things, and direct your affections to things invisible.” Here, the visible things are the wonders of the world, things that make life worth living. And the caipirinhas? Definitely recommended. The recipe is simple: squeeze half a lime, mix in 2-3 teaspoons of brown sugar, add crushed ice, and pour in sugar cane vodka. Rye vodka will do in a pinch.