Law and order as far as the eye can see. None of that post-Soviet ruin that marks the landscape of neighbouring Ukraine. The cities and towns look freshly renovated. Everything is spotless. The lawns are mowed, the planters overflow with flowers. The apartment blocks have been given facelifts. The roads are good, properly maintained, and well marked. There are highways, and not just the “Olympic” highway built for the Olympics in Moscow (the Polish branch was never constructed). Drivers on foreign license plates can pay the toll in a number of currencies (excluding the Belarusian ruble). Numerous gas stations offer fuel imported from Russia at prices lower than in Russia itself. The roads are lined with undemolished bus stops, some of which are adorned with murals and mosaics. Local drivers are surprisingly polite, and even stop at crosswalks. Signs posted at corners contain detailed instructions for pedestrians and reference the appropriate laws. 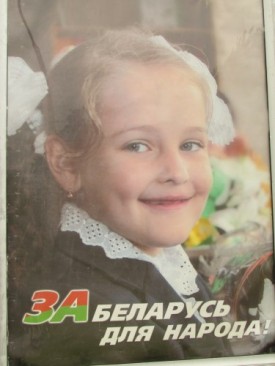 photo: Maria PoprzęckaOperation Harvest has been a success. Stubble fields stretch out towards the horizon. Endless rows of corn wait to be gathered. The old, romantic notion of villages with wooden houses is dying out. But the country’s dictator is busy erecting new, standardised agro-towns with handfuls of little houses.

The capital, home to nearly two million inhabitants, has its own ring road and a functional metro. “The Sun City” is the country’s only completed socialist utopia, with long avenues that even rival Kiev’s Kreshchatyk in terms of scale. The Soviet city center was built by German POWS — and they did a good job. The beautifully-maintained parks and green banks of the Svislach provide refuge from the summer heat. The reconstruction of the old town — or rather something imitating an old town — is nearing completion. The city has rebuilt not just destroyed churches, but even buildings about which little is known, aside that they once existed. The government realizes that the city needs more than just grandiose avenues to lure in visitors: people are drawn to picturesque streets with restaurants, art galleries, and elegant boutiques. And so these amenities have also been built. But the most flashy official building erected in recent years is the glass edifice of the National Library, which resembles a polished diamond, shining amidst an array of construction sites. The city is currently undergoing a construction boom, a mind-boggling one at that, considering the nation’s financial troubles. But that’s not the only thing that’s hard to fathom. 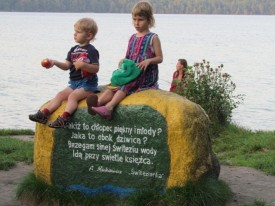 The president, who prides himself on remembering everything and finding a solution to every problem, has opted against the use of deprecated propaganda measures. No imagery. The Bat’ka wants to find a place in the heart of his subjects, not on portraits. What matters is that the citizens love their country. The slogan “I love you Belarus” is ubiquitous. “Let the capital bloom!”, proclaim banners hung all over Minsk. It’s true: one would be hard-pressed to find another city decorated with this many flowers. Armies of people with brooms tend to endless lawns, parterres, and flower beds.

The identity and national pride of Belarus is built upon the foundation of the Grand Duchy of Lithuania. Mir Castle, horribly reconstructed from the historical perspective, nevertheless serves its intended purpose: educating the nation about the history of Belarus. Oddly enough, the castle is recommended by UNESCO — which placed it on its list of World Heritage Sites — and draws hundreds of thousands of tourists who obediently listen to lessons on national history and respectfully gaze up at the closed-off top floor, which houses the presidential suite. The head of state isn’t there of course, otherwise the entire castle would have to be off limits, and the town shut down. 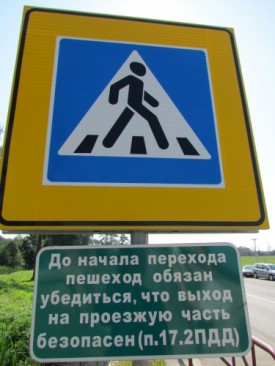 Political history augments and modifies the concept of heritage. The reconstruction of the Radziwiłł estate in Nieśwież, which had progressed at a snail’s pace for years, finally picked up speed two years ago and is nearing completion. The director, a PhD from the Catholic University of Lublin, selected through a contest, is consciously implementing a multi-functional program for the enormous estate. Once completed, it will feature a museum, theatre, restaurants, and a hotel, as well as permanent residences for the former owners. The Radziwiłłs, like other noble families, have been included in national history and tradition. The reconstruction of other aristocratic homes — the Sapieha estate in Różan, and Pusłowski property in Kosów — continues.

“It’s part of our history” is an oft-cited argument in defense of Lenin monuments that stand in every town. But is the Second Republic of Poland also a part of that history? Not quite, it seems, although the new heroic and bombastic exhibition at the Brest Fortress devotes a separate room to the interwar period. Among the exhibits is a copy of the Molotov-Ribbentrop Pact. It is surprisingly laconic. Three and a half pages typed in a large font decided the terrible fate of several million people.

Where damnatio memoriae has not been implemented, historical idiosyncrasies abound: Bolesław Bierut street leads to the Polish Calvary Cemetery in Minsk. The recently named Jerzy Giedroyć Street intersects with Dzerzhinsky Street. The Holocaust remains a white spot on the map of historical memory. The modest little monuments erected here and there completely fail to reflect the large scale extermination of the Jewish population, which once constituted the majority in Belarusian cities and towns. While Catholics and Orthodox Christians have fought to have their churches rebuilt, there’s no one around to demand the reconstruction of destroyed synagogues

These hasty notes from the road aren’t a defense of Lukashenko’s Belarus. Spoiled landscapes, garbage, billboards, advertising, and graffiti aren’t the only things missing from this country. There’s no freedom, either — a fact we are acutely aware of. And that is why we need to visit Belarus. The Sisters of the Holy Family of Nazareth who run a hostel in Navahrudak sadly told me about the tour groups that have canceled their stays, scared away by the media coverage of Belarus. We need to visit Belarus because we’re needed and expected there. Not just by the local Polish population, but also by Belarusians, who see ties with Polish culture as a chance to escape isolation. Our historical relationship with Belarus is stronger than with any other neighbor. It is more than the birthplace of great Poles such as Mickiewicz and Kościuszko. We need to visit Belarus to listen to and record the “guardians of memory”, the complex and multi-faceted memory of this blood-stained land. We need to visit Belarus to shock ourselves out of our preconceptions, stereotypes, and our unjustified sense of superiority. And finally, to experience and understand that the power of a dictatorship stems not just from violence and oppression, but also from good roads, clean cities, and green streets.