While experiencing the 7th Berlin Biennale, curated by Artur Żmijewski, I couldn’t stop thinking of art in terms of a weapon against the status quo, and its expected impact – can art as a weapon be successful (if “success” is still a word to be used)? Artist Andrea Fraser has something to say about that. In her essay L’1%, C’est Moi, she suggests that if the artist’s only choice is to participate in the art market or abandon the art field entirely, artists can at least stop rationalising the whole participation in the name of critical or political art practices. Furthermore, Fraser argues that any claim that artists represent a progressive social force while their activities are directly subsidised by the engines of inequality can only contribute to the justification of that inequality – the not-so-new legitimation function of art museums. Following these premises, in her view the only “alternative” today is to recognise the artists’ participation in the art economy and confront it in a direct and immediate way in all of our institutions, including museums, galleries and publications.

Another leitmotif of my wandering from one biennial venue to the other is the current state of exhibition-making and its relationship with the notion of signature, authorship and creativity. In particular, I thought a lot about the practice of collector-turned-artist Ydessa Hendeles, whose first solo show at Johann König I saw while visiting the biennial. When asked if she considered curating to be a medium, she answered in the affirmative; provided that the experience of it proved comparable to that of an autonomous work of art. Another condition was that the show didn’t compromise the art displayed by projecting a personal or even a curatorial agenda onto it. She also asserted that rather than assembling artworks to illustrate a thesis or theme at the cost of the individual pieces, a show should ideally allow each work of art to speak with its own unique voice. 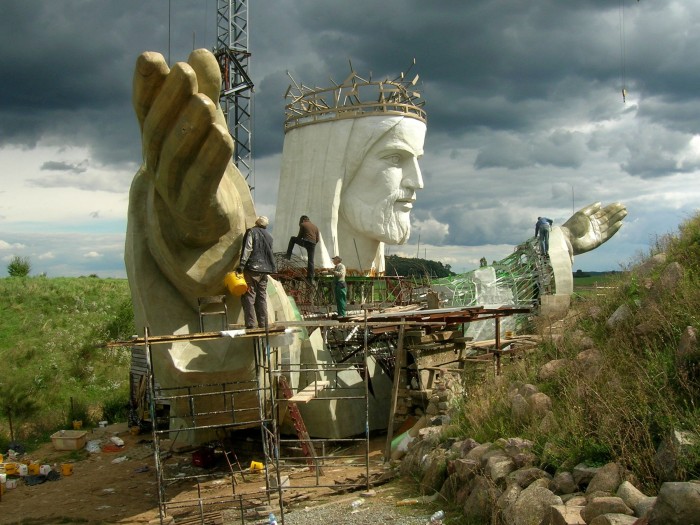 BB7, Construction of the statue of Christ the King in Świebodzin, photo: Tomasz Stafiniak

Following this stream of thoughts, I came to the conclusion that there must be two ways of seeing Artur Żmijewski’s Berlin Biennale. Like almost everything that happens in the field of contemporary visual art, it all depends on the context – be it given or self-created – in which things are presented and understood. The first and most apparent way is to see this project as a group exhibition featuring artists, activists and politicians with the goal of bringing “real politics” into the art field. “Finding answers, not asking questions”, as Żmijewski wrote in the catalogue intro. Through this perspective the project breaks the cliché of the conventional art exhibition by proposing a new model where the space that is usually given to art objects – commodities – becomes something else. By “something else” I mean a place for debate, a dimension that is no longer symbolic. Reality is brought here as it is. At this point we must forget that we are going to an art institution. We have to get ready to finally face what is happening in the world: from the identity crisis of the Western model to attempts at finding an alternative to a paradoxical reality. More than ever before, this reality is using the model of representative democracy to deliberately make the rich richer and the poor poorer.

This is where we take the title of the exhibition – “forget fear” – and make it into our credo. We forget our priorities, especially the fact that we’re going to see an art exhibition. The second step is to realise what the world needs from us to become a better place. We must act in order to not let the others turn it into a disaster where freedom is a luxury; where the separation between politicians and voters is ever more visible; where things just don’t work; where people die on the street. Possessed by this spirit, we are emphatic towards the Occupy Movement taking place at KW, we understand the subversive nature of Martin Zet’s project based on Thilo Sarrazin’s book Germany Does Away With Itself. We become curious about Rebranding European Muslims, a project by the Tel Aviv-based initiative Public Movement. Last but not least we definitely join Yael Bartana’s First International Congress of the Jewish Renaissance Movement in Poland. 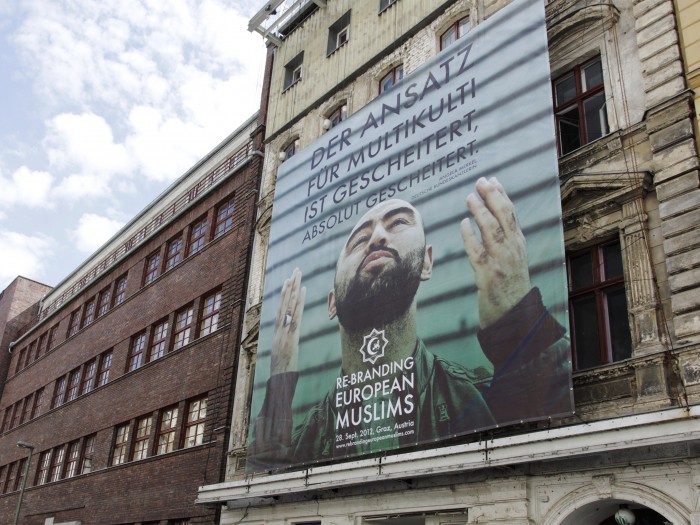 Unfortunately these are just appearances.  In fact, whoever thinks an art biennial in 2012 can become a place for revolution is either naïve or completely ignorant of the reality in which we exist. The paradoxical reality where representative democracy is used to make the rich richer and the poor poorer, is far more diabolical, manipulative and sophisticated. The days when you could pit one idea against the other are long gone. They have become a fairy tale for those few old activists from the ’68 left, who didn’t embrace the very same system they were fighting so desperately.

In this paradoxical reality where everything is immediately absorbed by the system, Żmijewski’s Berlin Biennale is a complete failure. All the attempts he made to present another model, to fight the establishment, to “find answers instead of asking questions,” to be political – whatever that means – are just tickling the system. You can hear it giggling all over the exhibition. On page 31 of the biennial catalogue Marcin Śliwa writes: “I could agree with the diagnosis of Zbigniew Libera, who said that he has no trust in artists who dress up like social activists and act like them. That is, they address the same questions as themes, but in fact, they are not playing for social good but for their own artistic stakes.” For those who haven’t made the connection yet, I just want to remind them that Żmijewski is not the outsider and revolutionary he is trying to convince, himself and us, to be. He is a mainstream artist with shows at institutions like the Museum of Modern Art in New York ­– which functions thanks to everything this biennial seems to fight – and is represented by commercial galleries such as the Foksal Gallery Foundation which could sell Żmijewski’s work to the Museum of Modern Art in Warsaw, whose director Joanna Mytkowska started the very same gallery and who curated Żmijewski’s project for the Venice Biennale Polish Pavilion, or to the Kunsthalle Basel, whose director Adam Szymczyk also started the Foksal Gallery Foundation and co-curated the 5th Berlin Biennale four years before Żmijewski, who himself had a solo show at the Kunsthalle Basel. 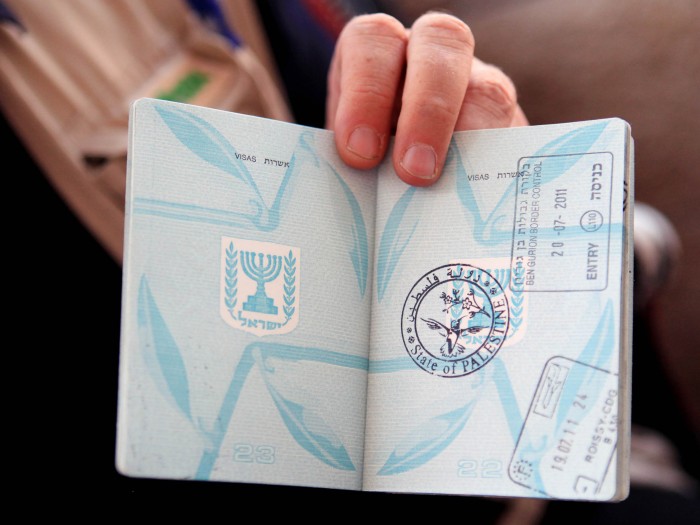 In this incestuous scenario, it is really hard to believe what Żmijewski is trying to convince us with this exhibition. For those who are not blind enough to really understand the diabolical power of the system, the suspicions start from the very beginning: the title “Forget Fear”. Taking that into consideration and seeing all the biennial employees – hopefully none of them were unpaid interns – with the same logo on their t-shirts, I couldn’t help thinking how appropriate this would be for the next campaign of a brand like Nike. Let’s just for a moment substitute “Forget Fear” with Nike’s slogan “Just do it” and  switch the biennial’s logo – something in between the number seven and the Polish white eagle – with Nike’s famous “swoosh” logo. Would things look so different? In fact the strategies used by Żmijewski often remind us that the enemy is trying to fight with all his strength. Everything he is doing gets absorbed and transformed by the system even before it is conceived, for the simple reason that there is no “outside” anymore. The more we use the old dialogical model, the more we will just become victims of ourselves, soldiers of the dictator we are trying to fight.

So what is the “alternative”, to bring back Andrea Fraser? How can we find a way to confront all our institutions in a direct and immediate way? Fiction is always helpful in this case. The first way to empower ourselves after having seen this biennial is to consider the role of the viewer as similar to that of someone who has just watched a reality show. The Occupy Movement at KW is a perfect example. All the actors have been directed – or exploited – by Żmijewski. This mastermind did it in the very same way as he did in the video 80064, where he persuaded an elderly Auschwitz survivor to have the faded number on his forearm refreshed by a tattoo artist. In other words, nothing seems real at the 7th Berlin Biennale; even the term “biennale” is fake, as this is not a biennial or a group exhibition. This is a massive artwork by Artur Żmijewski, and if we don’t realise that – Ydessa Hendeles’s words might be helpful here – we just believe in the fiction and becomes victims of it.

Once we consciously understand that an exhibition can be turned into an artwork – which symbolically means that we have the possibility of changing the structure around us from the inside – things start to make sense and all the pieces fall into place. Trying to summarise my experience, I think “Forget Fear” is a very advanced artwork by Żmijewski, probably his best. It is not a political exhibition though. It shows the problems of our reality, but the remedy it provides doesn’t function effectively. It is a good commentary on our reality, although it is not a tool for freedom in its current form. At the very end, through ways that are unexpected even to its maker, this exhibition makes us realise that the time to find an alternative to this reality is needed like never before. 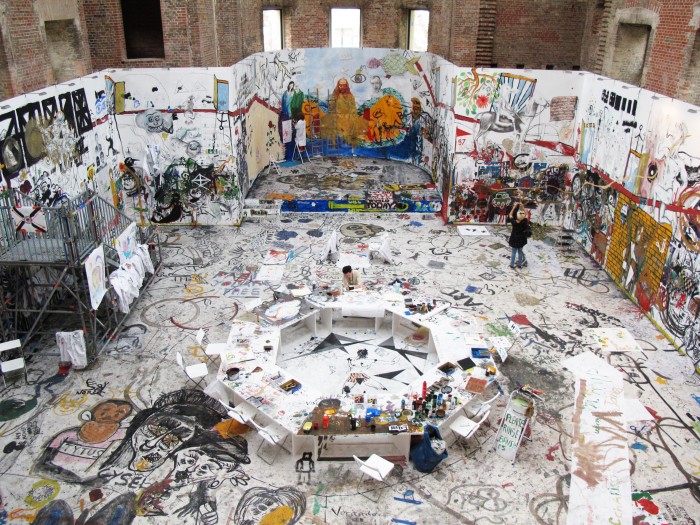 Artur Żmijewski did something seemingly simple, something which should’ve been done a long time ago. He transplanted mass onto the theatre stage, directly, with no changes made