Artist Piotr Uklański’s latest album appears at first glance as a rather self-indulgent tribute to his own childhood ouevre. Haven't we all stumbled at some time or another upon yellowed sheets of rough paper filled with zealous stick figures basking in the sun – and hungrily inspected them for aspects of subtle genius lurking within? And haven't we all wished that they'd been preserved better and not left to spoil in a shoe box in the basement? What a privilege it would be to have them properly bound like Uklański’s collection, with a hard canvas cover in a serene shade of blue. Examining our childhood drawings, we find ourselves stepping into the past in an attempt to figure out that little person we once were. We are instantly curious about our primary thoughts, ideas, goals and exactly what we meant to say by that awkward Mother's Day card. Perhaps, aware of the usefulness of such drawings in determining a child's psychological health, we even peer into these scenes in pursuit of some sign of disorder, dysfunction or some trauma that might explain certain defects in our adult personalities? 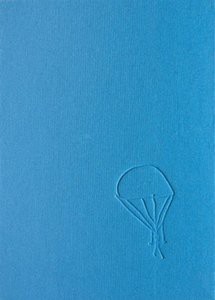 Piotr Uklański, Early Works
40 000 malarzy Publishing House,
Warsaw 2010
languages: Polish, EnglishAnalytical approaches children’s drawings, such as the Goodenough-Harris Draw-A-Man Test, originated in the 1920s and were developed through the 20th century. The results are potentially a telling rundown of insecurities, fears and anguish that are manifested through the child’s “technique” – the choice of characters, their colour, scale and relativity. And yet these hidden messages are only uncovered if a real problem manifests itself in due time. Otherwise, these secrets stay locked away until we fish them back out and attempt an ad-hoc analysis of our own.

Most of us don’t grow up to be artists. Piotr Uklański is among the lucky few who have achieved success in the field, exhibiting at such prestigious galleries as the Gagosian in New York. So when he looks back at his childhood drawings, one assumes he may too be seeking that grain of artistic talent that later proved so abundant. And yet the truth is, they're pretty amateur. The same cowboys and Indians, soldiers, knights and pirates in the pages of Early Works are much the same as in the early works of the average child. But Early Works is not about tracking signs of early artistic prowess. This is made clear in the introductory text, Bravo Piotr!, written by psychologist Agnieszka Ziątek.

Uklański has allowed himself the rare luxury of not only having his childhood drawings published, but also analysed by a professional. And what is the verdict? The artist as a very young man proves himself to be an independent thinker, an individual who “refuses to fit within the narrow framework of educational institutions and expresses his own views of the world on each and every sheet of paper”.  Ziątek applauds his unique, noncoformist vision of the world. In the realm of contemporary art, after all, a sense of individuality and a conceptual knack are of far greater importance. In fact, Ziątek likens these works to the cave paintings of early men, whose primitive strokes are sincere and to the point. Yet even these simple drawings are indicative of a flair for building narrative and expressing major ideas. He manifests confidence and ambition – key to propelling his future success.

Still, the text seems to signal that there might perhaps be something amiss. Some of Piotr’s characters are missing certain body parts. One drawing depicts a Nazi invasion, another shows a snippet of life under martial law, with soldiers, police officers and tanks in the street (the conceptual beginnings, perhaps, of Uklański’s brut art of the present?). Then there is the faceless figure of a woman who appears trapped in the geometry of a window frame. A big, blue, goggle-eyed monster taking up an entire spread in the very centre of the book. Ziątek expresses concern about the lack of familial scenes. Even when a mother figure is depicted, she is tiny and faceless. The father is altogether absent.

The album provides answers to these questions in the form of a reprint from a local newspaper article written by Jacek Petruczenko at the end of the 1970s. The lengthy text about the tragic fall of the U. family appears at random towards the end of the book, in the midst of an illustrated Templar battle. However, the English version of the article pops up smack in the middle of the book, with no explanation at all. Here is my only qualm with the book – while the Polish version yields a yellowed reprint of an authentic article, the English text is printed starkly, black-on-white, with no clues to indicate its practical significance in filling in the missing pieces of Piotr Uklański’s Early Life.