Igor Pudło a.k.a Igor Boxx (born 1966) – alternative musician and composer working in dub and electronic. Wrocław native and founder of the solo project Breslau. Igor Pudło began his musical career in 2000 as one half of the Skalpel duo, together with his friend Marcin Cichy. As DJs and producers, Pudło and Cichy created a unique style that roamed across musical genres, joining the traditional sounds of original Polish jazz of the ‘60s and ‘70s with novel electronic beats. 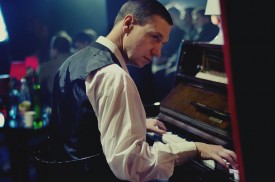 Igor Boxx,
photo: European Culture CongressTheir music was picked up in 2004 by the well-known Ninja Tunes label in London, publishing two albums that were received quite well by critics both in Poland and the UK. In 2005 Skalpel received the Passport award from the Polityka weekly for their “unique marriage of jazz and electronica, for an easy and creative crossing of the boundaries between musical styles”. Their sound was a way for those to rediscover jazz standards like Stańko or Urbaniak through a new, contemporary perspective that was appealing to both Polish and international audiences – the band travelled the world with their Ninja Tunes line-up, playing alongside other major international acts.

Today Igor Pudło has been reborn as Igor Boxx, founder of the Breslau project. Breslau is heavily rooted in the historic-political legacy of what is today the Polish city of Wrocław, formerly Breslau – until it was renationalised at the end of World War II. Boxx reverts back to his earliest memories and impressions of the city in order to create a very ambient sound that brings together dance, punk, jazz and rock, interspersed with various snippets of original film dialogues and other curiosities.

In this section we introduce Polish artists, places, and new phenomena. We always ask the person or the place’s representative the following question: WHY ARE YOU HERE? How they answer it is completely up to them. Time for Igor Pudło.

Overall, the album is a musical fantasy based on the siege of Festung Breslau by the Red Army in 1945. The resulting sound is like a time machine that zips audiences through the vinyl era, live jazz, blues, big band and swing, the furtive pursuit of samizdat recordings in the time of the iron curtain, a hit of hip-hop and a sudden blast into the eerie, futuristic sirens and tempos of contemporary club music – with a twist of Tarantino. It is a sweep through all of Europe, landing with a thud between the East and West – the heart of Central Europe.

With such a deep-seated, complex background, Boxx is not your run-of-the-mill DJ – but he’s taken a heavy topic and poked some fun into it, playing with the notions of historical fact, fiction and the way human memory wavers between the two, gathering a great deal of nostalgic dust in the process. The video Boxx’s Last Party in Breslau is a graphic roast depicting Nazi soldiers enjoying a decadent evening at a local cabaret just as the city is getting bombed. The drunken revelry is punctuated by a jumpy, swing-inspired soundtrack that is fun, but cut with a sharply sinister edge. It carries the spirit of carpe diem with the promise of payback lurking just around the corner.

Igor Boxx is performing works off of the Breaslau album at the European Culture Congress. The DJ series at the Festival Club – Four Domes Pavilion hosts Boxx on Friday, 9 September, 2011 at 22:30.

QUOTES:
“I’m old enough to remember the birth of punk rock, witness the glorious days of golden era of hip-hop and to evolve with my homeland Poland from communism to capitalism and from analogue to digital with my music, and since 1991 I help the entropy by being a DJ and mixing music (without stylistic limitations) and other noise that people, animals and machines make. I cut and paste all that jazz.”

“When I tried becoming a rapper, I put the lyric ‘I can’t tell you how/But Wrocław’s still Breslau’ into my first song (the song itself was about the rampant spread of skinheads in our city). Luckily, I never made it as a rap artist. I still like the rhyme, though now I put a new spin on it and changed it to ‘I can’t tell you how/But Wrocław’s still kind of Breslau’. I became a DJ instead of an MC, and began my career at the Kolor club. It was located in a bomb shelter underneath the New Targ square, and had served as an… entertainment hotspot during the siege of Breslau as well. In his Microcosm, Norman Davies writes that a report from the Kletshkau prison mentioned a new category of inmates, the Bunkerliebchen – or ‘Bunker Girls’ – who were usually convicted for prostitution. These women would put flowers in their hair and romance the front line troops who would share their alcohol and food rations for brief a moment of respite.”

“When I was a kid, I believed that Festung Breslau was this monumental stronghold, a second Malbork: entanglements, walls, moats… Only recently did I learn that it wasn’t quite as spectacular as that. But when I was making the record, I was still drawing on that early impression, instead of historical facts. That’s why it sounds so apocalyptic at times. I started getting into the details of it all only once I had recorded the music – I bought Norman Davis’ Microcosm, memoirs by two officers, and other publications. But once again: Breslau is not historical movie soundtrack.”

“It’s exciting that computers, which initially were meant to be calculating machines, transformed into musical instruments.”