Medialab Lublin (25-28 August, 2011) proved to be an organic kind of experience. All four workshops, that it consisted of, focused more on a  process, which involved analogue media, or a certain problem, less on technology itself. There was a goal to pursue, but it wasn’t imposed.

The Medialab Orchestra was led by Paweł Cyrta, sound and multimedia specialist. Firstly he introduced some sound theory. It helped working on the score of a piece the group decided to play at the lab’s closing. To accomplish that you need to have instruments though. The participants used all kinds of material: funnels, rubber bands, bowls, balloons, wooden planks, hair-pins, toilet brush, a trampoline, Arduino, piezoelectric sensors, water, current. They looked for sounds that reflect consecutive stages in the world’s history. Imagining how these stages sounded or sound like.

From silence, through bangs, blow, bubbling, whistling, folk singing, rustle, clatter, feedback loops on laptops, and the sound of typing on a keyboard. As a result of only a few days’ work of people who just met, the concert turned out to be not just an interesting music-piece, but a moving situation to participate in. It was the commitment and honesty of all the involved. Very simple and unpretentious joy to be seen and felt. I stop here, because I’m getting pompous. 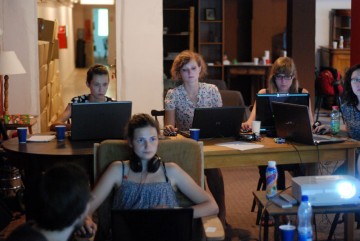 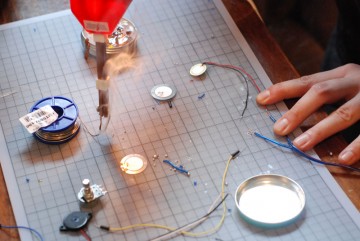 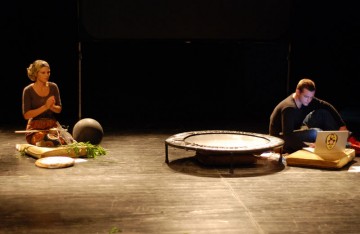 2/10 of the Medialab Orchestra onstage, photo: A. Słodownik 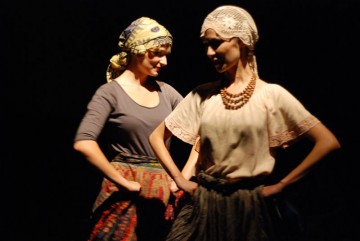 The folk dance, photo: A. Słodownik

One day project was dealt by the digitisation workshop led by Maciej Rynarzewski (PhD candidate at the University of Warmia and Mazury, The Faculty of Humanities, works at the University Library dealing with digitisation), Marcin Wilkowski (founder and editor-in-chief of the History and Media project and website) and Grzegorz D. Stunża (media educator). It was inspired by the BBC Domesday project that took place in 1986. Back then people were asked to record whatever they could from their everyday life, which they thought would be interesting for others in 1000 years from now. In case of the Medialab the goal set was to digitise one day, 27 August, in Lublin using methods available to all amateurs: desk research, photographing buildings on the streets, choosing and photographing “markers”, that is artefacts such as bags and suitcases of travellers waiting for a bus. 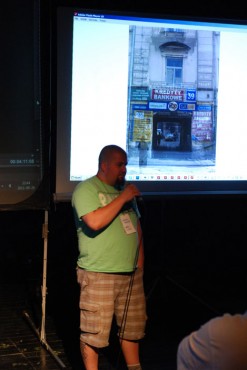 Re-photography, photo: A. SłodownikThere was also re-photography involved, and interviews. As a result we could see how apartments and houses in Lublin look from the inside (when you lent a house via a website you often publish pictures of rooms with your furniture and other belongings still in it), what do poeple sell using on-line sales companies, what is the traffic on some pedestrian crossings and more. Much of the workshop’s value, in my opinion, was the questions it evoked. What can or cannot be digitised? Can the outcome be objective? What criteria to use when choosing “markers”, since it is obvious 1:1 digitisation is not possible. Unless you are Charlie Kaufmann and you “move” your characters to (almost?) fully reconstructed world, like in Synecdoche, New York.

Krzysztof Trzewiczek (software and interface designer, creator of interactive and multimedia systems) taught how to deal with databases that consist of thousands of records and are far from being “clean”. The participants used open source software to get rid of typos, choose only the key data, process it, and then visualise it (e.g. Python, Processing). Krzysztof Trzewiczek says that such data visualisations are “methods of thinking”, they can inspire asking questions, but do not raise them themselves. Having the knowledge of processing data can be crucial to civil society. Yet the ones that own data, have to make it accessible first and the form needs to be processable. Otherwise further handling and conclusions won’t have the chance to emerge. 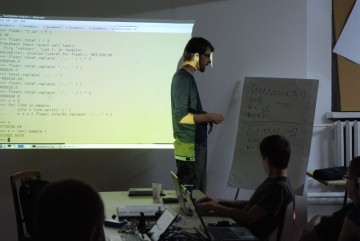 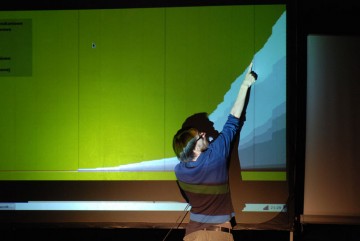 Krzysztof Trzewiczek presents the results of the workshop,
photo: A. Słodownik

Last, but not least, Masterclass with the expert advice by Paweł Janicki (WRO Art Center) worked on scanning the networks and analysing data that flows through it. Barbara Dzierań (Art Academy in Kraków) came up with an idea for a narrative group game that reffers to the roots of Carnivore: spying on net users. Teams of players would have to find a person that’s sending some specific data by scanning the net and in spite of obstructions that will surely occur. Marcin Ignac (CIID Copenhagen) visualised network connections between computers.

Olo Janas (kilku.com collective) spied on the Municipal Office to see how much time white collars spend on Facebook. He was disappointed to find out that FB is on a list of banned addresses. 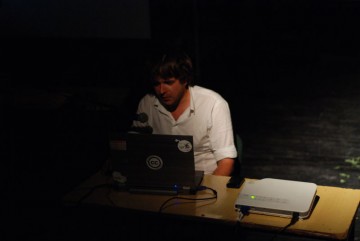 Olo Janas and his “inside story”, photo: A. Słodownik

Marcin Korzekwa (Jagiellonian University in Kraków) wrote a software that compares chosen websites’ content and shows how much text, image, links and applications one has. He compared political parties official websites with a gossip portal, which gave spice to his commentary. 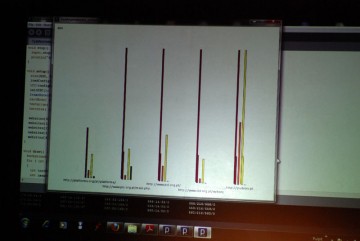 Text versus image in the upcoming election campaign,
photo: A. Słodownik

Wojtek Morawski’s work (Adam Mickiewicz University in Poznań, wo) introduced me to sonification of websites. So I listened to two different solarium websites. One was more high pitched then the other. I wonder how biweekly.pl sounds like.

I left Lublin with a feeling of balance between organic and synthetic and thinking that technology introduced new fields of expression that “everything’s already done” phrase just doesn’t apply to. How exciting!

I would like to present a pragmatic side of open source from several complementary perspectives. To reflect on what is its educational dimension, what comfort means in open source, and why less cost means more cost even though more cost means less cost