Kobas Laksa (born 1971 in Białystok) — photographer, graphic and video artist, graduated from the Academy of Fine Arts in Poznan. In 2003 he began composing large-scale collages, the first series of which — Urban Project: Warsaw (2003–2005) — featured a vision of the urban future assembled from distorted elements of existing architecture and cityscapes. Winner of the Golden Lion at the Venice Biennale of Architecture in 2008. Author of short films and music videos (for example for Abradab and Plastic). His latest project Spycifestum took place in Spycimierz. There, together with the town's habitants, Laksa piled up a carpet out of flowers with the inscription: “Save Us Lord! We are dying!”

Selected projects include:
- short film User's Note [Sceny z użycia, 1997] created with Cezariusz Andrejczuk about a drug dealer disappointed with the hedonistic life he leads. The film was awarded with a Grand Prix at the OFFCINEMA festival in Poznań in 2001;
- short film I was at the pilgrimage with my mom [Pojechałem z mamą na pielgrzymkę, 2000] about a trip to Licheń Sanctuary, the largest church in Poland;
- contribution to the short film Fikcyjne Pulpety from 1996 (which could be translated as “Fictitious meat balls”) by Wojtek Koronkiewicz. The piece was a parody of Pulp Fiction shot in the scenery of Białystok;
- short film Could I take a bath or sleep over at your place? [Czy mógłbym się u Pani wykąpać albo przespać?];

QUOTES:
“I much more prefer cheap, seemingly uninteresting objects, because you can create a new quality out of them.”
“I feel like an explorer and a tracker of the expanding urban tissue.”

WHY ARE YOU HERE?
Kobas Laksa interprets the above question in regards to his latest project in Spycimierz. 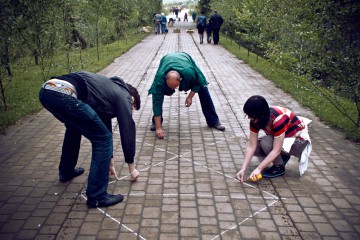 Co-participation in the life of a local community works in favour of
individual development, as long as it has something to do with
exploring places, meeting people and processing space by the means of being active. It's perfect when places and people differ, so that it's harder to
generalise in research and observations, hence it's less probable to
fall into routine. The experiences collected give me more freedom in
consecutive projects. 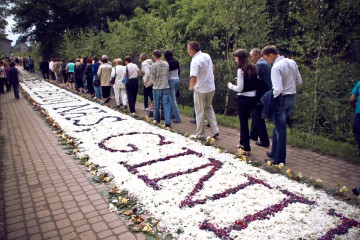 I’d expect even more creativity, as lack of funds works to its benefit. How about time? Isn’t that a great side effect to unemployment?

A call for more culture in EU’s cohesion policy!

Winter is coming. Curl up on the couch with some hot tea and issue #31 of Biweekly

Listen to recordings from Stage 1 Auditions

Will Poland take example of its neighbour and one day reach this beautiful state of no-billboards-on-top-of-other-billboards?

For all those who are unable to take part in the Europan Culture Congress debates in Wrocław there are online broadcasts on culturecongress.eu

Maybe the summer is almost gone, but the true cultural blossom is still to come. Captain Europe, the superhero, is here to give you the foretaste

The Inauguration of Polish Presidency in the EU was an all‑day musical performance on 1 July, 2011. See the artists of the world music stage

The Inauguration of Polish Presidency in the EU was an all‑day musical performance on 1 July, 2011. See the artists of the experimental stage

A premiere performance of Symphony No 3 by Paweł Mykietyn, composed for the Inauguration of the Polish Presidency of the EU Council took place on 1 July in Warsaw Philharmonic at 20.00. It was broadcasted online on Biweekly.pl

On the eve of the Polish EU Presidency Krasnogruda will host the grand opening of the Czesław Miłosz International Dialogue Centre. On this occasion enthusiasts of the Nobel Prize Winner’s art will arrive from all over the world. One of the guests will be Zygmunt Bauman who will participate in the Agora of Philosophers

The Cultural Programme of the Inauguration is planned as an all‑day musical performance on 1 July, 2011

Bieńkowski managed to revive traditions slowly taken over by modern living. I listened to wedding compositions, while mourning over something inevitably passing away

The film ‘Love Europe World of Zygmunt Bauman’ was released 12 May on DVD. It was available on Biweekly.pl in its entirety for four days (12–15 May 2011)

The latest book by Professor Zygmunt Bauman was released 12 May. The book premiered at the Warsaw Book Fair

This is the time, when the nature vs. culture dilemma is easy to puzzle out

‘The kitchen window was open onto the black night, saturated with dreams and complications.’

What better way to inaugurate the second year of Biweekly than with the Film Spring Open, especially with classes led by such professionals as Andrzej Waluk and film screenings featuring the likes of Bogdan Dziworski

Why is Werner Herzog’s ‘Lessons of Darkness’ so moving and what does Libya have to do with me?

The cover of Biweekly#14? Should one take it easy? Will the sun, inevitably coming our way, blind our sight to essentials?

The year 2010 is coming to an end. Should we COUNT on culture in the next one?

The happening is designed on the idea of the ‘Chinese whispers’ game. Marcin Cecko’s poem, published in Biweekly#01, went through an evolution of translations, from one language to another in the pre-established order

Film director and screenwriter. Born in 1925 in Krakow; died in the year 2000 in the city of Łódź. Has made himself known as an artist of great individuality, one who avoided political or commercial tones in his art

My favorite word? Budget. The source of control, planning and context. Am I the top shelf, or am I the cheap stuff. On the other hand, isn’t that context where the limitations emerge from?

Although we do read, we’re all but Readers now. We watch, comment, listen, click, send, follow, spy even. So what do we call this ‘position’? E-pedestrians? Web Travelers? Over-reactive Responders?

In this section we introduce Polish artists, places, new phenomena. We always ask the person or the place’s representative the following question: WHY ARE YOU HERE? It’s completely up to them, how are they going to interpret the question and answer it. MIKOŁAJ DŁUGOSZ is up next

It’s all because of Dwutygodnik.com – the online Polish periodical about culture. A year after Dwutygodnik’s first issue it was clear that its English version is a necessity. Why? Because we wanted to share