Joanna Rajkowska(born 1968) – installation artist. Every tourist in Warsaw notices a great deal of things about the city that don’t make sense, but perhaps the most striking object of all is the palm tree on the De Gaulle roundabout. What makes it even stranger is the fact that it’s an artificial palm tree, planted in a climate that could never naturally host such an exotic specimen. And yet, after a few minutes, it all starts to make sense. The palm tree, one of the city’s most identifiable landmarks after the Palace of Culture and the PKO Bank’s Rotunda headquarters, has become an irrevocable part of the urban landscape.

This controversial installation was created by artist Joanna Rajkowska in 2002 as a temporary project that sought to take up the irksome topic of Polish-Jewish relations post-WWII. Even decades after the war, an awkwardness remains between the two nations which lived side by side in peace for centuries. The fake palm tree’s highly symbolic location along Jerusalem Avenue was a poignant jab aimed at instigating a fresh conversation on the disappearance of Jews from Polish society and the ensuing lack of diversity among today’s population and its repercussions. In this relatively homogenous society, what role do identity and varied viewpoints play in creating culture, business and even politics? 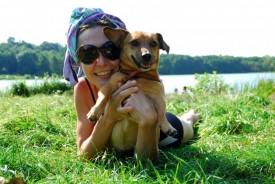 Rajkowska’s project was considered very controversial and many were against it. But, as it turned out, many more were for it and appealed for the palm tree to stay in Warsaw. It’s ever-green leaves are a constant reminder of sunnier climes that in today’s era of fast travel are not quite as distant as they once were.

While Rajkowska began her career in the arts with works that dealt with issues of corporality and psychology – marrying issues of the flesh and sexuality with those of dysfunction and consumerism, such as in Satisfaction Guaranteed – a series of cosmetics and soft drinks made from her own bodily fluids. This series already established Rajkowska as an artist who was uncompromising and unafraid to push boundaries of taste or convention. When she planted her infamous palm tree, she suddenly became a political artist without necessarily meaning to do so. The social and political implications of the palm tree were magnified to a massive scale, but Rajkowska managed to maintain a balanced outlook and refused to be daunted by those who took on extreme views of the project. Quite simply, she’d been inspired by a trip to Israel and wished to transport a piece of that world to Warsaw – a city in which Jewish culture once thrived, but where little of that legacy remains. The palm also goes to show that anything is possible – even a palm tree growing in the centre of Warsaw.

Nature and the symbology of nature continued to have an important place for Rajkowska. Her next project was the Oxygenator – a series of installations in public places meant to provide fresh air and, most importantly, a place to lounge around, observing their surroundings and interacting with others. Polish city dwellers are not quite as open as that of our western or southern neighbours and strangers do not usually fall into conversation spontaneously. Rajkowska’s projects create a setting for people to come together and have a greater chance to get to know one another as fellow residents. One of these installations was set up in the area of the former Jewish district, providing a place for respite in an area with a very troubled historic legacy and inadequate urban planning. Today the area is being expanded and improved, with Rajkowska’s little square still a focal point for those who want to take a break while bustling around Warsaw.

Her efforts were recognised and applauded not only by local folks, but in 2007 she was also awarded the prestigious Passport Award given by the Polityka weekly for “remarkable projects realised in the public space, for lending a hand to the human being wandering about the city”. Rajkowska’s work stretches itself across the realms of nature, politics and life itself. She’s an artist working for the community, an artist who is not focused on herself, but rather on her audience, on the people who are the ultimate recipients of her works. Her goal is to create something that will provide joy, entertainment and food for thought for anyone who happens to stroll past one of her projects. Her goal is to give the city back to its residents, wrenching it away from corporations who want to twist and turn it in every way just to make a profit and giving it back to the people who make the city a living thing, a vibrant being pulsating with life and activity.

Last year, Rajkowska joined five other artists from Europe in Konya, Turkey in a project meant to explore the complex relationship between tradition and modernity in the country today. Her project was founded on the academic theories of Walter Benjamin on translation and the linguistic legacy of Ottoman Turkish.

In this section we introduce Polish artists, places, and new phenomena. We always ask the person or the place’s representative the following question: WHY ARE YOU HERE? How they answer it is completely up to them. Time for Joanna Rajkowska.

Currently, Rajkowska is preparing a project in the city space of Białystok within the framework of the Journey East project, one of the local flagship projects of the cultural programme of the Polish EU Presidency. Coordinated by the Arsenał Gallery, Rajkowska’s installation also takes into consideration the physical and social make-up of the city and establishes a project that will once again promote interaction among its residents, with aspirations of an even wider scope of geographic and cultural consciousness. As a member of the EU and a partner to the east, Poland has been endowed with the monumental role as a sort of ambassador in both directions. The Journey to the East project incorporates all of these aspects in a work that is meant to endure through the years – the installation itself, however, remains a secret until its unveiling in early August.

QUOTES:
“The city, the urban space, is an area that should belong to the people, in which everyone can say – this is my space, I can shape it as I wish, I can make it thrive. A free space for expression that spreads to a fluid narration of identity, the space of games – this is the vision of a city in which I would like to live. Corporations, outdoor firms in no way should commercialise the urban space because they take it away from people. Such a city becomes a dead being, a place for commerce and political recreation, formulated for the needs of media campaigns. We don’t even realise how great an influence this has on our behaviour, how it slowly shapes our own selves.”

“I dreamed up nothing. I don’t wish for anything at all. I don’t make anything up. I just perceive things: from outside. When the palm was created, it was created with the place – Jerusalem Avenue. Greetings from Jerusalem Avenue is an idea drawn from language, specifically an attempt to describe a trip to Israel. Several frames of memory overlapped. The view from the small hotel in Jerusalem, a postcard with the words ‘Greetings from Hebron’ written under a photograph of a rather bald hill with a rickety palm tree, and Jerusalem Avenue, which for me is the axis of Warsaw. There’s also a frame filled with helplessness, an incapability of understanding the situation in Israel with a single logic. In a quite literal way, it’s the transference of a view – which in Jerusalem is quite expected – to Warsaw, to a street whose name, in turn, brings us back to Israel.”

“There is a lack of people who are different in the full meaning of that word, who demonstrate these differences without shame, but also without aggression. Our society lacks the Arabs or the Africans. We lack the energy of immigrants who decide to leave everything behind and start again, we lack their angst and drive. Maybe it is because of this longing I feel so comfortable at the Stadion Dziesięciolecia [10. Anniversary Stadium which used to serve as Europe’s largest open-air market with traders from China, Taiwan, Russia, Ukraine – ed.]. In terms of diversity Poland is pathetic. A white, Catholic society unified by similar behaviours and similar beliefs. This silent understanding, this ‘normality’ are horrible. There are no minorities or majorities, there is a more and less wealthy homogenate. This is where Polish racism and intolerance come from.”

WHY ARE YOU HERE?
The most honest answer would be: “I have no idea.” I would have to write several pages on the subject to reply to this question.