Having returned from the Film Spring Open, held in Kraków, I can only think about two things: 3D and the work of Bogdan Dziworski. This edition of the largely outdoor workshops was the sixth in the history of the Open. The main theme this year was 3D, but the choice had little to do with being trendy. It was treated rather as a technique that any cinematographer must be cognizant of if he or she considers themselves a professional (although judging by the participants of the FSO, the hes greatly outnumber the shes). Sławomir Idziak, a renowned cinematographer and the head of the entire venture, says that 3D should not be treated as a gimmick slapped onto a movie poster in order to guarantee serious revenue. It has to be chosen wisely, in keeping with the concept of the film, its aesthetics, and its script. Surprisingly, budgetary constraints do not have to play a great role in the decision. As the hands-on classes at the FSO proved, 3D effects can be achieved with a bit of ingenuity and just a touch of money. 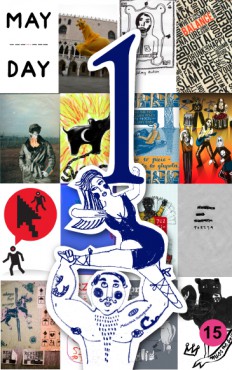 Special Birthday,
cover by Malwina KonopackaThe programme of the FSO, which goes on until 7 April, is quite rich and consists of lectures, hands-on classes, and film screenings. As for the latter, I won’t list all the films on the agenda, since some can be seen at film festivals in Poland and Europe (and surely elsewhere). But there was a rare gem shown at the Open, namely the documentary work of Bogdan Dziworski. We watched “just” four of them last night, before we were forced to stop. It was getting really late, and were it not for the 8 am breakfast, we could have gone on until the very morning. A Few Stories About a Man (Kilka opowieści o człowieku, 1983) was the first one shown that evening, and most of the audience already knew it by heart. Still, everyone was stunned by the great photography, the author’s narrative imagination, as well as by the character himself. The Welcome Quote in Biweekly#16 is Dziworski’s subtle, friendly joke about his protagonist Jerzy Orłowski, a man with no arms who is nevertheless capable of swimming, skiing, and drawing with amazing precision. A spitfire and perfectionist. But oh, the photography! (The FSO is, after all, about the realm of the image.) What ingenious eye and what perfect execution.

One of Dziworski’s students leaned towards me and whispered:

“Yes, I understand.” I replied to myself. Another student murmured:

And he sighed deeply.

Oh, Biweekly is one year old. When did that happen?

3D has been around now for almost a hundred and sixty years. Introduced to the public at London’s 1851 World Exhibition, Queen Victoria loved it

I’d expect even more creativity, as lack of funds works to its benefit. How about time? Isn’t that a great side effect to unemployment?

A call for more culture in EU’s cohesion policy!

Winter is coming. Curl up on the couch with some hot tea and issue #31 of Biweekly

Listen to recordings from Stage 1 Auditions

Will Poland take example of its neighbour and one day reach this beautiful state of no-billboards-on-top-of-other-billboards?

For all those who are unable to take part in the Europan Culture Congress debates in Wrocław there are online broadcasts on culturecongress.eu

Maybe the summer is almost gone, but the true cultural blossom is still to come. Captain Europe, the superhero, is here to give you the foretaste

The Inauguration of Polish Presidency in the EU was an all‑day musical performance on 1 July, 2011. See the artists of the world music stage

The Inauguration of Polish Presidency in the EU was an all‑day musical performance on 1 July, 2011. See the artists of the experimental stage

A premiere performance of Symphony No 3 by Paweł Mykietyn, composed for the Inauguration of the Polish Presidency of the EU Council took place on 1 July in Warsaw Philharmonic at 20.00. It was broadcasted online on Biweekly.pl

On the eve of the Polish EU Presidency Krasnogruda will host the grand opening of the Czesław Miłosz International Dialogue Centre. On this occasion enthusiasts of the Nobel Prize Winner’s art will arrive from all over the world. One of the guests will be Zygmunt Bauman who will participate in the Agora of Philosophers

The Cultural Programme of the Inauguration is planned as an all‑day musical performance on 1 July, 2011

Bieńkowski managed to revive traditions slowly taken over by modern living. I listened to wedding compositions, while mourning over something inevitably passing away

The film ‘Love Europe World of Zygmunt Bauman’ was released 12 May on DVD. It was available on Biweekly.pl in its entirety for four days (12–15 May 2011)

The latest book by Professor Zygmunt Bauman was released 12 May. The book premiered at the Warsaw Book Fair

This is the time, when the nature vs. culture dilemma is easy to puzzle out

‘The kitchen window was open onto the black night, saturated with dreams and complications.’

Why is Werner Herzog’s ‘Lessons of Darkness’ so moving and what does Libya have to do with me?

The cover of Biweekly#14? Should one take it easy? Will the sun, inevitably coming our way, blind our sight to essentials?

The year 2010 is coming to an end. Should we COUNT on culture in the next one?

The happening is designed on the idea of the ‘Chinese whispers’ game. Marcin Cecko’s poem, published in Biweekly#01, went through an evolution of translations, from one language to another in the pre-established order

Film director and screenwriter. Born in 1925 in Krakow; died in the year 2000 in the city of Łódź. Has made himself known as an artist of great individuality, one who avoided political or commercial tones in his art

My favorite word? Budget. The source of control, planning and context. Am I the top shelf, or am I the cheap stuff. On the other hand, isn’t that context where the limitations emerge from?

Although we do read, we’re all but Readers now. We watch, comment, listen, click, send, follow, spy even. So what do we call this ‘position’? E-pedestrians? Web Travelers? Over-reactive Responders?

In this section we introduce Polish artists, places, new phenomena. We always ask the person or the place’s representative the following question: WHY ARE YOU HERE? It’s completely up to them, how are they going to interpret the question and answer it. MIKOŁAJ DŁUGOSZ is up next

It’s all because of Dwutygodnik.com – the online Polish periodical about culture. A year after Dwutygodnik’s first issue it was clear that its English version is a necessity. Why? Because we wanted to share